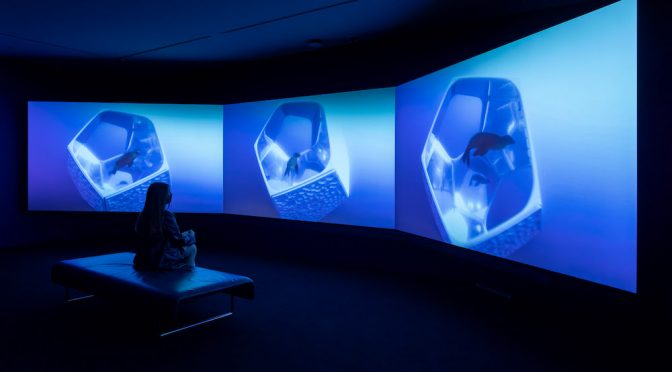 The Doug Aitken : New Era exhibition is part of the MCA’s Sydney International Art Series which aims to bring the world’s most outstanding modern art exhibitions to Sydney.

The media preview was unique in several ways.

It was the final international exhibition that outgoing MCA Director Elizabeth Ann Macgregor OBE would be presiding over.

The artist himself addressed the media from his Los Angeles studio overlooking Venice beach. In particular he thanked the MCA for staging the exhibition which he tailored specifically for the Gallery over a period of three years, and singled out the exhibition curator Rachel Kent. Ms Kent was thrilled that she was so intimately involved with the first staging of Doug Aitken’s work in the southern hemisphere.

Rachel Kent advised that if you wished to see his work you may have to travel to the Brazilian  rainforest or dive beneath California Bay to see his sculptures tethered to the bottom of the ocean.

Fortunately one can leave the scuba gear behind as the aquamarine works are captured in a three screen, immersive visual and aural soundscape entitled ‘Underwater Pavilions’.

The most arresting of his wall sculptures, the neon lit and the shimmering cut glass depiction of the year of his birth, one that was marked by counter culture revolution.

The 100 years neon sculpture symbolises the time that is taken from an industrial and manufacturing revolution to the digital age where intangibles are highly prized.

There is a slightly dystopian aspect to Doug Aitken’s works.

In ‘Migration’ (Empire) 2008 it seems that humans have vanished and the generic motel room is inhabited by jack rabbits, a deer, a puma, and an eagle, to name but a few of the animals briefly occupying the room.

Other highlights include ‘Sonic Fountain 11’ (2013-2015) where it appears that a huge stunted volcano has erupted in the gallery where drips and jets of water spill from a suspended ceiling grid onto a pool below, their sound amplified to create a rhythmic drumming that swells and recedes according to computer algorithms.

The major work that gives its name to the entirety of the exhibition, ‘New Era 2018’ which is yet another immersive experience that viewers enter into to highlight the inventor of the mobile phone, Martin Cooper, which in a series of striking images (including Cooper) highlights the way in which something that is supposed to bind us together, can, at times, alienate and dislocate us.

Throughout the exhibition one sees Aitken’s interest in time, light and, reflection which evoke a dizzying landscape that is bombarded with communication and transmission forces into a future where there will be little control on the masses.

The exhibition opens on the 20th October, 2021 and runs until the 6th February, 2022. It is a ticketed event that is free to MCA members. Accompanying the exhibition is a Thames and Hudson publication which features a series of in-depth interviews with the artist and curator along with a generous smattering of illustrations highlighting the striking works from the show.

A series of talks, performances and film screenings will also accompany the exhibition. The first of these will be a virtual in-conversation event with Doug Aitken in Los Angeles and Rachel Kent in Sydney on Saturday 30th October, 2021 between 11am  and noon. Tickets are now available from the MCA website.

For further details and information please refer to the MCA website at www.mca.com.au.

Featured image : A clearer view of ‘Underwater Pavilions’ (2017) is a three-channel video installation featuring a series of sculptures or ‘pavilions’ created by the artist in collaboration with Parley for the Oceans, a non-profit environmental organisation.  Photo courtesy of the MCA.

Article  and photos, unless otherwise credited,  by Ben Apfelbaum.