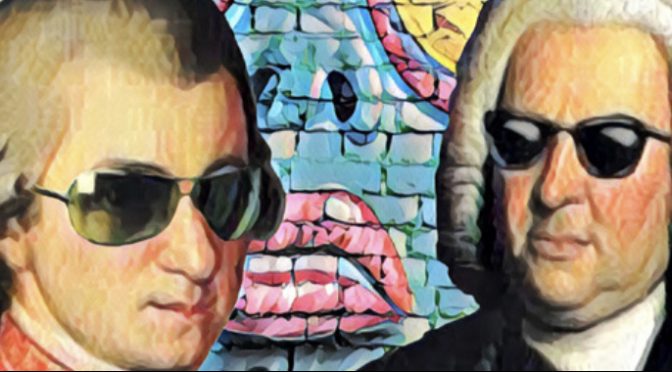 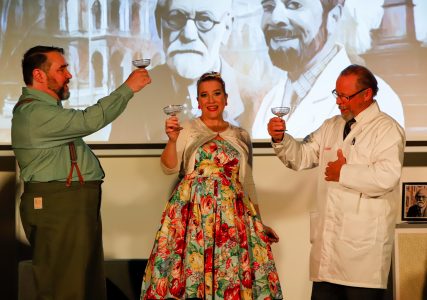 What do you get when you mix two out-of-the-box vocal works neatly accompanied from the stash of Baroque and Classical masters with slick production, clever direction across a well set stage design in a gorgeous room with full voices and great visual comedy keenly costumed ?

At this event in Customs House’s elegant  ‘Barnet Long Room’, organised with round tables, bar and snacks, the wit and dramatic genius of Bach and Mozart was a treat. We were treated to quite an electric update in snappy English translation from the German. Both halves of this double bill featured hilarious modern and local references to lighten the challenges of the status quo in our post-2019 society.

The troupe of five singers and actors was admirably supported in the elegant and intimate venue by a tight sextet of string, keyboard and wind players led by Peter Alexander.

This band provided pre-production music from the featured composers and beyond as we took to our tables. Attention to musical and sympathetic accompaniment duty in delivery of the musical complexity and swiftly changing styles in the dramatic pastiches was solid and substantial throughout for both the venue and these works. 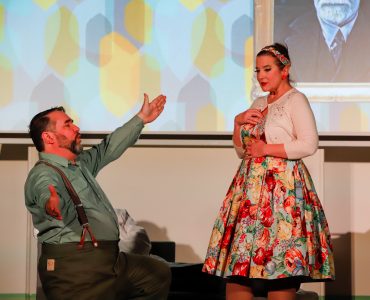 The cast and directing team of Christine Logan and Anne Wynter ensured these snappy versions two more-than-masque works brightened our once more masked worlds. In the opening Singspiel Bastien and Bastienna, penned effortlessly by a pre-teen Mozart, the elements of this early  genre were present alongside some more modern parlour@ stage antics.

The turning of both pained protagonists to a rather Freudian therapist offering his magic/astrology/life coaching to unravel the predicament was perfect Singspiel and svelte, short, sitcom fare.

There was considerable stage chemistry between Bastienne and her bumbling Bastien’s  fine vocal delivery and lost-in-love expressions. The role of the Doctor was brought to life with commanding voice and character both onstage and in audience interaction by Sydney Chamber Choir regular, Ed Suttle.

At times the clarity of English text delivery was momentarily blurred as trained voices delivering the complex lines over the instrumental tapestry. Snippets of the brilliant translation were missed which was a shame as it was all subtle genius to match the music. Maybe some surtitles on the video screen backdrop could have been an option worth considering. 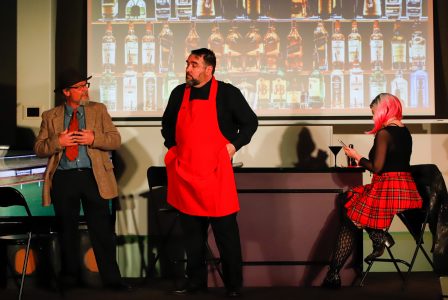 In Bach’s Schweigt stille, plaudert nicht  (‘Be Silent-do not chat’- or the Coffee Cantata) which followed the group truly levelled up. They turned Bach’s elaborate musical exploration of caffeine addiction distracting a daughter from the typical girl-finds-boy life goal to a bar scene romp.

The set and same cast from the Mozart was now transformed to a modern bar complete with live TAB race footage and wicked ubiquitous espresso martinis from dashing barmen giving lost girls comfort in the time of coronavirus. 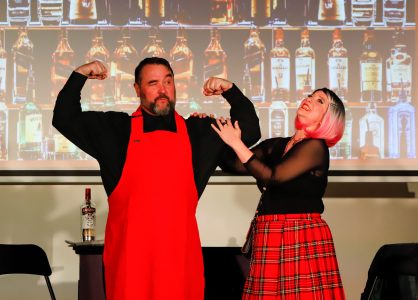 Trouble, family and flirting plus a lot of rejoicing in the coffee flavour frothed  over the chuckling crowd as the performers and creatives for the second time treated us to a cup and saucer  combo of soaring melodic lines over a dazzling instrumental saucer in a visually stunning and bustling café.

Well-packaged entertainment, hospitality and nicely wrought wit was consistently served throughout this night as Endagered Productions paid respect to musical genius past, bringing it successfully to the present. We look forward to  future shows from this assembly of talent.