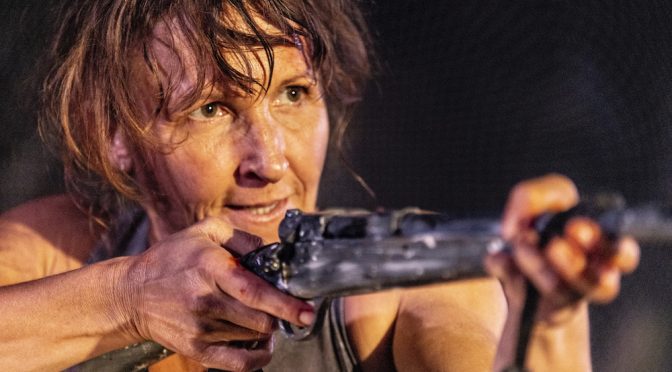 The opening of DOGGED is spectacular. Under a black, low-ceilinged cave of a set, Sandy Greenwood prowls on as Dingo, a mother of three missing pups. She’s hungry, she’s angry and most of all she wants her babies back. We are immediately engaged. We feel for Dingo in her pain.

The program tells us Woman is heading into her 40s and is the daughter of a white farming family settled into Gunaikurnai mountain country. Woman, armed with a gun, is hunting dogs.

Dingo provides disgusted commentary as Woman skins wild dog carcasses for the government’s bounty money and Dog waits for his supper. We wait for the fall out.

What follows over the course of 80 minutes is an exposé of hunted and hunter, murder versus survival, the universality of family bonds, Australian colonialism and oppression of First Nations people.

This allegorical tale from Andrea James and Catherine Ryan doesn’t hold back. Nor should it. It’s an ambitious work and for the most part it comes off. Greenwood and Yangoyan are magnificent in their anthropomorphic roles, each trying to understand the other. Both are partially masked. Yangoyan’s Dog injects some humour into the piece, without losing any of the pathos.

Best’s character Woman is interesting. On the one hand, she has grown up on this land and knows it like the back of her hand. She is a mature woman and third-generation settled. Next, chasing after her Dog – who has joined up with Dingo – she is lost in what had been familiar territory.  A swarm of moths, which Dingo says happens every year, is news to her. It’s an awakening of sorts, but I expected her to know.

In any event, Woman, Dog and Dingo find themselves stranded high up in a cave, unlikely allies under possible siege from a party of city slickers out on a weekend wild dog hunting expedition.

The first half of Dogged builds to a visceral and moving scene from Dingo, who is confronted with a massacre of her pack including her mate for life. In its aftermath, the scenes that follow struggle to maintain such intensity of emotion and tension.

Killer Dog arrives (also played by Yangoyan). He’s with the city hunting party and again his performance is strong and balletic, extremely watchable. Like Dog, he is conflicted by his loyalties. But when bagpipe music breaks out and Killer Dog starts performing a version of the Highland Fling, I admit bafflement. James and Ryan’s script is loaded with references to colonial history, and there is a lot of exposition required of Best’s role, but it is not until later that the full atrocities of Scottish pastoralist Angus Macmillan come to light. With hindsight, Killer Dog’s dance makes sense.

There is much to like and admire in DOGGED, under the direction of Declan Greene. The performances are excellent, the set and lighting design (Renee Mulder and Verity Hampson) transport us into this rugged world where dog fights dog and humans fight them too. Movement director Kirk Page’s influence can be seen in wonderfully portrayed canine behaviour and fights.

Nonetheless, there were some moments when I wished for more, and sometimes for less. Killer tries to mount Dingo – a rape scene with colonial master/oppressed connotations? – but it was there and then it was gone; the negative ending to Dingo’s justifiable howl of a speech that scuppers any hope of reconciliation not long after some promise of future accord had looked possible seemed to signal the end of the play, and then it went on. The final scene involves a mask on a stick. It was Disney-esque. Without an actor behind the mask, it jarred.

None of which means I don’t recommend DOGGED.  Its message is huge and needs to be told. As always, Griffin gives us new Australian work and the story behind DOGGED, however uncomfortable it may make some of us feel, needs to be told. Loudly. “What should I do?” asks Woman.

“Listen!” says Dingo. Listen. It should not be so hard to do.

DOGGED is presented by Griffin Theatre Company, in association with Force Majeure, and runs at the SBW Stables Theatre until 5 June. Tickets from $38-$62. Bookings: https://griffintheatre.com.au/whats-on/dogged/