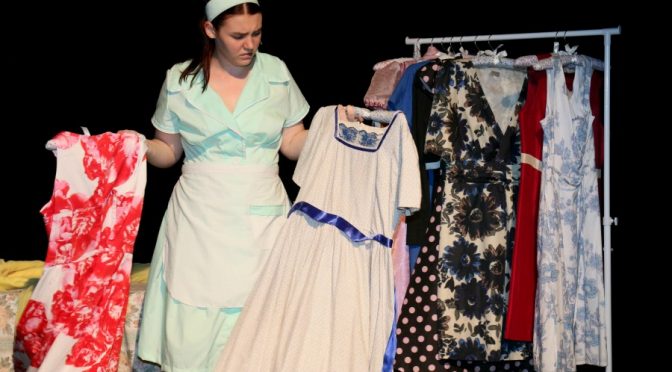 Blackout Theatre is kicking ass and taking names at Lend Lease Theatre in the Darling Quarter.

Add my name to the list: the list of supporters and advocates for this kick-ass community theatre and the list of audience members who absolutely loved DOGFIGHT on its opening night.

DOGFIGHT is a musical set in San Francisco, November 21st 1963 as the Vietnam War rages and Haight Ashbury is attracting the ‘love not hate’ unwashed . It was written with hindsight in the early part of the second decade of this century by Benj Pasek and Justin Paul, known together as Pasek and Paul, who won the Golden Globe and have been nominated for an Oscar for LA LA LAND. It did not wow at the time.

Here are some names for you: Derek Klena; Lindsay Mendez. They were in the original production. DOGFIGHT had a very successful season at the Hayes in 2015 but this is DOGFIGHT’s Australian amateur premier.

Eddie Birdlace sees himself as a soon-to-be hard bitten US marine. Eddie and his equally rambunctious comrades in arms are shipping out tomorrow for the Vietnam War. Kennedy has called them, the army has sort of trained them and like their fathers before them, they are determined to serve and protect. Unfortunately some pretty obnoxious attitudes are intrinsic to their gung ho and if they really feel different they aren’t going to let it show. The dogfight of the title is a buy-in comp where the marine with the ugliest date wins the pot and the boys are on the prowl, putting women in harm’s way. Eddie thinks he’s on a winner when he wanders into a diner and meets Rose, a vulnerable late bloomer who looks like she might win Eddie some cash.

Two more names now. Jenny Woolley and Ryan Henderson. These two performers play Rose and Eddie in this production. And what a joy to see them work… each individually and as a romantic couple to emotionally invest in.

Jenny Woolley is all that!! She has a lovely mezzo which she uses to wonderful effect, especially in the lower registers where the whispers, recits and Sprechgesang are so important to the character. A character clear and present in Woolley’s performance. When an artist can cope with set mishaps and costume mishaps and business mishaps without missing a beat you know you are watching someone to look out for. It’s a big ask role. Google Lindsay Mendez singing ‘Funny’ and you can see what Woolley has to live up to. I sent the links to this clip to friends as I was casting around for companions to come with me and invariably we all had a little text message sook. And Woolley is everything we wanted to see live… not a recreation of something wildly successful but her own interpretation, her own phrasing and her own emotional rendering. Yep, we needed tissues … Woolley kicks ass.

Ryan Henderson carries this show. Eddie is in almost every scene, impels the story and has a very large emotional arc to travel. Henderson’s acting is really terrific, his voice is up to the intensity of the role but where he excels is in his character choices. Eddie is abrasive and obnoxious and hard to love when we meet him and in Henderson’s interpretation he’s a bit less abrasive, slightly less obnoxious yet worthy of love by the end. He doesn’t soften Eddie too much or strip away his macho exterior, he stays true to the character just incrementally introduces enlightenment.

This is a redemptive musical after all. It defiantly does not pass the Bechdel test , which is a gender litmus test for women in literature and the arts. Here we have blokes who are boisterous and unapologetic, women who are manipulated and used. But when the worm turns and Rose finds strength, the whole audience cheered. This is community theatre and while a nit-picker might linger on less than perfect production elements, it has power where it needs it. In the stellar leads, the excellent live music and the exciting ensemble work.

Blackout’s DOGFIGHT has a wonderful supporting cast. The Marines are terrific and they have obviously worked incredibly hard on their chorus work and their very manly choreo (Stephanie Bellchambers). Jed Arthur as Eddie’s young mate Bernstein and Matthew Giles as the pack leader of this trio, Boland both do a great job. It’s evident they have great fun together and ‘We Three Bees’ gives the camaraderie and bonding which endears them to the audience. And you have gotta love artists who apologise for their characters in their bio. I love this company!

Briony Burnes as Marcie, a professionally ugly ringer at the Dogfight is exciting to watch. Sassy and defiant with a great voice on display especially in the duo ‘Dogfight’ with Woolley. Brendan D’Souza as the Lounge Singer was also outstanding. I actually had a sore bit where my friend kept nudging me every time he was on. Chippy and the Fondues were exuberant and fun to watch and if you want to see the antics that this company get up to, check out ‘Chippy’s’ HouseMateGoals Youtube.

Musical Director Koren Beale again keeps her brilliant little band out of the way of the actors. Cleverly hidden behind a curtain leg to avoid catching the audience eye at the wrong time, she also uses the music is subtly effective ways. The strings under ‘Funny’ were heartbreaking, the electric piano solo under the dinner scene and the spot-on perfect tempo for ‘Come Back’ just a couple of the ways I really appreciated her musicians’ under stated support of the singing. It has to be said that the audio mix was finding its feet on opening night but it will improve.

Especially with Director Angela Hanna at the helm. All the scenes mesh beautifully and Hanna obviously has a really clear vision for DOGFIGHT. It shows in the characters, her tight control over movement and placement, and particularly in the way she has gently enriched the main action with character-filled by play which brings the big scenes alive. If there is one example of how a community theatre director can excel, it is in the war scene.

I know this work really well and I will admit to being worried when I entered the auditorium. Wide stage, close to the front row, analogue LX! How on earth were they going to do the most important narrative scene of the show? Having put my name forward as a supporter of Blackout TC I should know better. It was fantastic. The soundscape was perfectly sourced and operated at just the right level, the clever use of a downstage harsh spot gave the audience a focus point, the cast were dead on with their movement and the emotional quotient ramped to the max.

Blackout Theatre’s DOGFIGHT deserves a mention in Dispatches and should have its name put up for some kind of Community Theatre Medal! The show continues until February 12th.

One thought on “DOGFIGHT : ANOTHER OUTSTANDING PRODUCTION BY BLACKOUT THEATRE COMPANY”