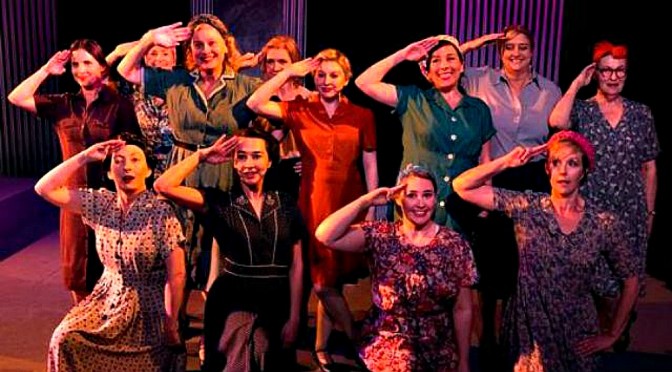 There are not that many plays with tremendous parts for fifteen women and a goat!

Linda Aronson’s wonderful play, full of music and with plenty of tap dancing, in a terrific production that has just opened at the New Theatre is splendid. Under Sahn Millington’s precise, deft direction the large ensemble performs exuberantly. The script is witty at times, much fun, at others dark, pessimistic and extremely tense.

Set in the fictional north Queensland country town of Warrabadanga, Aronson’s play follows the lives of a group of women working in a biscuit factory during World War 11. Their factory is one of the major businesses in town  but is going through hard times. Will the factory survive, threatened with closure, survive?

Through the course of the play we see  how the dynamic, resourceful workers fight to save the factory, organise what could be called a ‘Mum’s Army’ Civil Defence Unit, ( with hilarious scenes of air raid wardens and first aid training ),  how a huge show for the War Effort is produced – and how they manage to deal with the fact that two thousand US airmen have just been stationed outside town at an army base.

We also see how they deal with numerous other issues- the air raids, the major workplace tensions explode at times, how hidden secrets are revealed and how the characters cope with betrayal, death and romance. And most importantly how they can ‘kidnap ‘ Rita, the regimental goat!

The show is also about  the women seeking freedom and self expression – young Vi, played by Amanda Laing, is desperate to escape the crushing atmosphere of the small town.  Both Vi and her friend Rosie, played by Hannah Raven Smith,  are wannabe showgirls hoping to escape to the big lights and excitement of a city and become theatrical stars .

There are tense, dramatic scenes too – will Millie, played by Bodelle de Ronde, commit suicide or not? Does Joan , the new girl and outsider, played by Sonya Kerr, manage to fit in?  What secrets is she hiding?  Why does Connie, played by  Debra Ryan, in a icily magnificent performance, become friends and confide in Joan?

Marshall- Martin’s set is fluid and simple featuring a few archways, a raised platform   and a piano. Various parts of the set are slide in/ out (for example, the lockers for the change room ) for the many scene changes.

Aronson’s play was written in the late 1980’s, yet the script is of the 1940’s in a way , acknowledging the style and language of the time that has been placed in.

There are wonderful production numbers including Women of Australia , Sorry Uncle Orrie,  There’s a War On which turn out to be rehearsals for the grand finale, We Are the Dinkum Assorted Girls.

This show is a vibrant, inspirational celebration of women and community.

DINKUM ASSORTED is playing at the New Theatre until the 19th December 2015.