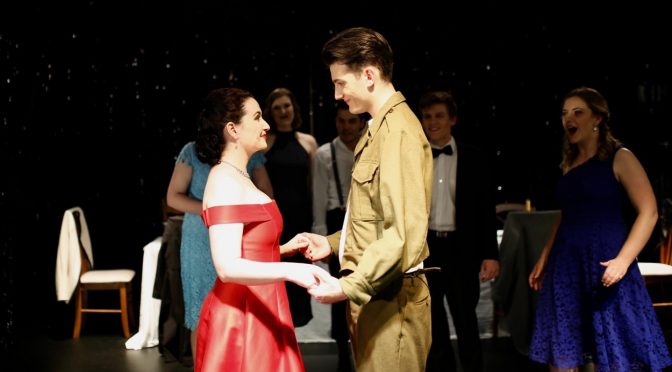 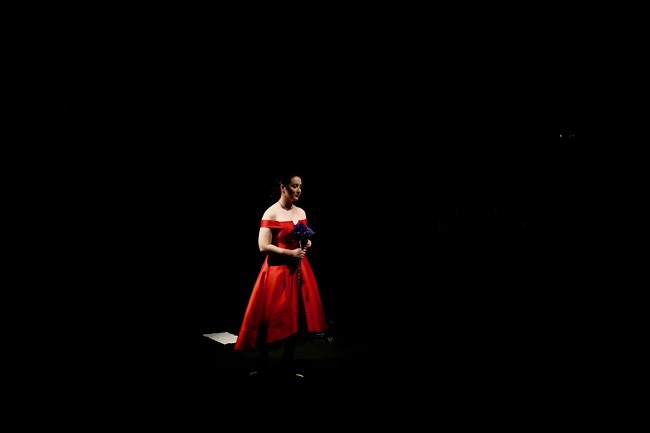 A thrilling, passionate production by The Other Theatre Company that was exquisite musically and vocally , featuring a splendid cast with a fine performance by all the ensemble and some stunning costumes.

Ably , thoughtfully directed by Euegene Lynch this production of Purcell’s 17th century opera has been updated to now and packs a great emotional punch . It is a somewhat simple staging but extremely effective .The set features a back drop of glittering long swishy black shimmering curtains , which the Orchestra led by Su Choung is hidden behind and as we enter the eye is drawn to the long table at which Dido’s court is having a feast with champagne and nibbles. It should be mentioned that at one point there is strobe lighting used.

The story of Purcell’s opera can be briefly summarised : Dido, the Queen of Carthage, falls in love with Aeneas ( who will eventually found the city of Troy ) . The gods ( here represented by the Sorceress and her team of malevolent witches) have other ideas: they doom the lovers. The Sorceress tricks Aeneas by informing him she is a goddess ,proclaims various bulletins that will require him to leave Dido’s side and stands back to observe the tragedy ,their world collapse . Dido, despairing, kills herself. It is a story about love, an overwhelming love – that when it is lost one’s world could end.

Our tragic heroine Dido was superbly performed by Rebecca MacCallion in glorious form.Her red dress is absolutely stunning. She was at times softly radiant at other times heartbreakingly aching and lamenting .At the start she is depressed and somewhat fragile emotionally , bemoaning her life saying ‘Peace and I are strangers grown’. At first she doesn’t want to marry Aeneas , as Belinda playfully suggests but eventually agrees and falls in love with him. Her final very famous lament When I am Laid in Earth was ravishingly powerful.

Our hero Aeneas – tall , handsome Leon Vitogiannis in army fatigues – was charismatically magnificent and in grand , seductive voice.There is rich chemistry between them .

Belinda, Dido’s main lady in waiting , as portrayed by Kirralee Hillier in a beautiful blue lace dress, was given a strong supportive performance and she was in fine , pellucid voice .

A most striking performance was given by Rebecca Hart as the Sorceress , tall and viciously captivating in black .Her team of witches ( Stella Hancock and Michael Burden ) were sinuously wicked.

The Other Theatre Company’s production of DIDO AND AENEAS was at the East Sydney Arts and Community Centre 34 Burton St, Darlinghurst NSW 2010 25 and 26 October 2019 only
Running time just under an hour no interval.

3 thoughts on “DIDO AND ANEAS BY THE OTHER THEATRE COMPANY”