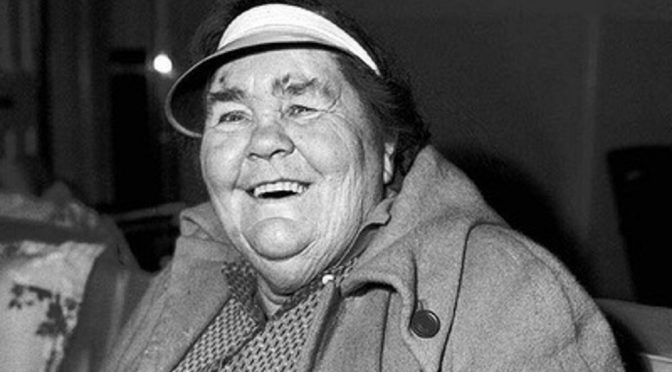 Beatrice Miles was born in 1902 in Sydney. She was the top of her class at the exclusive Abbotsleigh School for Girls.  She died 71 years later as a famous Sydney identity either loved or despised for her life as a rebel, bohemian, ratbag and vagrant. The transition from school dux to street identity is fascinating. What happened?

Actor Vashti Hughes expertly explores Bea in this 60 minute monologue in the very place Bea liked to haunt, the State Library. As you wait in the Metcalfe Auditorium for the show to begin, there are old photos of the places Bea liked to visit – her favourite sleeping spots, the cabs, the trams, parks and, of course, the library. These photos get you in the mood. Then Bea appears in a mad rush, talking to the audience, running behind the seats and climbing onto the small raised stage. You know straight away it’s going to be a fun hour.

Leaving Abbotsleigh and a conservative home life dominated by a violent father, Bea went to Sydney University to study literature. She soon felt constrained by the emphasis on English titles and asked where was the Australian writing and Aboriginal culture. It seems that’s where her rebellion began. But then she got encephalitis, and questioning authority turned to extreme behaviour. Eventually her father had her committed to the Gladesville Hospital for the Insane where she lived until 1925.

Was she insane? Vashti explores this question and other facets of Bea’s life with humour, action, poetry and Shakespearean quotes.  The show includes three videos from people who knew Bea, describing her delightful eccentricity. She valued sleeping under the stars. According to Bea, ‘If you own nothing you have everything’. Not everyone thought her antics were delightful as the local courts discovered when she was brought in for numerous offenses such as throwing  bus conductors’ caps out onto the street, refusing to get out of cabs and jumping into cars demanding to be taken for a ride. The numerous police reports flashed up on the screen are made to be very funny.

She earned money by quoting Shakespeare. Apparently she knew every sonnet and every play. Vashti is really three people on the stage. She plays the librarian who describes Bea’s life around the library and the memoirs she left in the grand Mitchell Reading Room which form the basis of some of the dialogue in the show. Vashti switches from the tentative librarian to the raucous Bae seamlessly. Her third character is Bea when Bea is reciting Shakespeare. She only did this three times in the show and you crave for more of it because Bea is a different person when reciting.

Vashti has a Bachelor Of Arts in Theatre Studies at UNSW. She writes and performs her own shows, mostly comedic monologues about Sydney elders such as Bea.  Bea’s life and notoriety inspired the naming of the BMiles Women’s Foundation, a specialist homelessness service for women.

The Metcalfe Auditorium is a good space for small performances with good acoustics. It was a terrific 60 minutes and the tickets are great value:  only $25 a ticket, $20 for library members. Vashti performs DICTIONARY BY A BITCH Saturday June 26, 2021.

DICTIONARY BY A BITCH is supported by the City of Sydney’s CBD Activation Grant program.