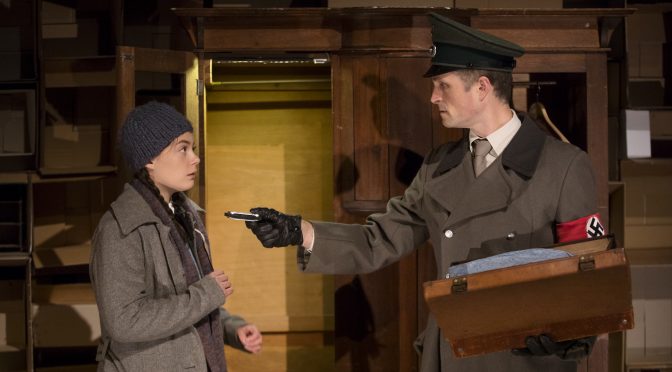 ‘To really get to know a person you have got to get inside a person’s skin and walk around a while.’ Atticus Finch in Harper Lee’s ‘To Kill A Mockingbird’.

This famous quote holds as true as ever.  We need to step outside of ourselves and into the ‘shoes’ of another human being to truly understand and accept them.

This is what British playwright Diane Samuels does with her play which explores what it was like to be a Kindertransport survivor. These were the Jewish children who the British Government rescued from the clutches of Nazism. Between the end of 1938 and the end of 1939 the British Government issued 10,000 permits  to get children out, minus their parents, and provide them with safe passage to England, where they were taken in by foster parents who were ‘charged with’ trying to bring order and stability back into their lives.

The play follows the journey of Eva from the time she leaves Germany for England to her own middle-age as a long established British resident with an inquisitive grown-up daughter who is demanding to know more about her long ago past., Samuels’ play also includes a non-naturalistic, symbolic level with the use of extracts from an an eerie children’s story, ‘The Rat Catcher’.

I found the  play authentic, and well served by Sandra Eldridge’s fine production. Sarah Greenwood as young Eva and Camilla Ah Kin as the adult Eva took us deeply into her world.

I consider myself a fair judge of the veracity of this production. My late mother was a Kindertransport survivor and over the years she told me a lot about what she and her friends went through-all the uncertainty and the challenges.

These Kindertransport children went through an unprecedented, tumultuous time which saw the complete disruption and dislocation of a life in a short space of time, moving from a settled, normal home and school life in Germany to saying goodbye to family  and moving to a new country, England, The challenge of having to come to terms with a new language and culture. The need to grow up quickly and assume adult responsibilities.

Eldridge’s  cast all performed strongly  and the work  of her creative team impressed . Imogen Ross’ set was exceptional, conveying so much; with the almost floor to ceiling bookshelves, so common in German households. They were of-course the nation who produced Goethe. Then there were the packing boxes and suitcases everywhere, portraying life on the move and the chaos involved.

My recommendation. See this production if you can.  Each survivor had their own story, coped with the trauma in their own way, made different choices, as indeed Eva and my mother did. Fascinating!