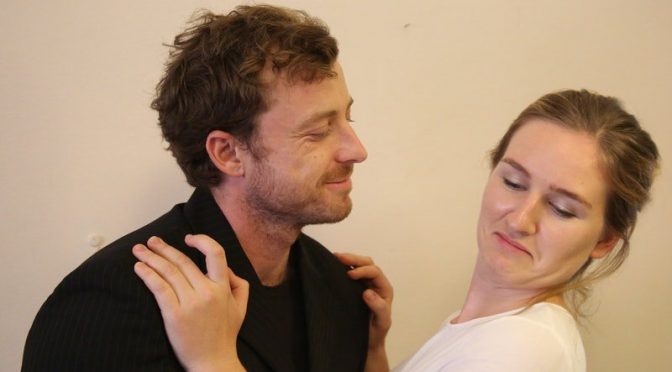 World Premiere of a brand new and quite superb Australian play, “The Devil’s Caress” by playwright Wendy Lewis, based on the 1952 Australian novel by June Wright, is a clever psychological thriller, as written by Australia’s very own Agatha Christie (June Wright). Set in Australia in the 1950s, so with so much doubt what is in the heart or in the head, and why is the first person to die called Kingsley? Doctor Marsh Mowbray is the woman who solves the murder and finds the perpetrator, fully interwoven with the actual story of June Wright herself, a Melbourne author/housewife/mother with six children (boy, girl, twin boys, girl, boy). This is unique take on a murder mystery, and with tons of insightful and very witty dialogue, the entire play is a very entertaining night of live theatre drama.

The author June Wright, is a housewife and very Catholic Mother with six children, and one might expect that there was a new child born each year of the marriage. June Wright is a very integral lynchpin and narrator of the play, who discusses her life and living well, with her character Doctor Marsh Mowbray, and it is this deep and meaningful interaction, that makes this play very memorable, a superb play that is well worth seeing a second time.

Stranger-in-town warns the bright young Doctor Marsh Mowbray, with the words “Doubt is the Devil’s Caress”. The doctor finds herself in a fast paced race against time, to prove that her beloved mentor, Doctor Katherine Waring, is not a murderer.

Melbourne writer June Wright (1919-2012) published six celebrated crime novels between 1948 and 1966, each with a strong-willed female amateur detective, including a young telephonist, a young doctor, and a nun. “The Devil’s Caress” is being brought to stage for the first time and also co-incides with the re-release of “The Devil’s Caress” in print through Verse Chorus Press, and now also available from Amazon in the Ebook version.