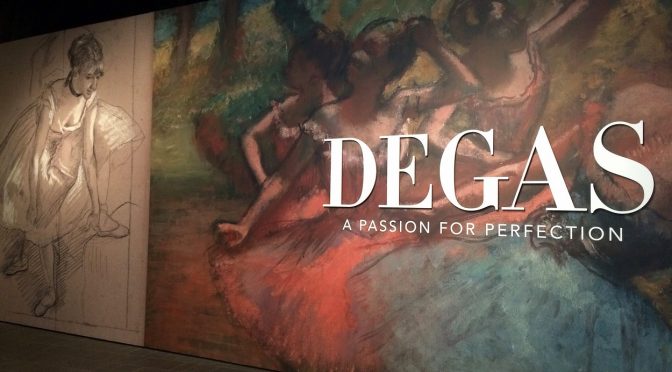 This is the latest from the team at Exhibition on Screen and examines the life and work of Hilaire-Germain-Edgar De Gas, AKA Edgar Degas.( 1834 -1917 ) .It is based on the exhibition at the Fitzwilliam Museum in Cambridge which then transferred to the Denver Art Museum. (The Fitzwilliam Museum’s extensive collection of Degas’ works is the most representative in Britain.)

It is lushly, glamorously photographed and includes a biography as well as shots of the exhibition and close ups of various works in great detail as well as comments by various curators and other experts . We see the exhibition being installed and conservators and curators talk about preserving the works.

The title of the exhibition and film was chosen to emphasis Degas’ differences from the ‘traditional’ idea of the shimmering , hazy , visual, quickly produced nature of Impressionism. With his admiration of the classical canon, his insistence on mastering drawing technique, and his refusal to paint en plein air, (he always preferred working in the studio). Degas here is regarded as a rather aloof outsider of the movement although he was great friends with some of the other famous Impressionists.( especially Mary Cassatt and Edouard Manet) .

Sometimes intensely frustrated by his own failings, and one of those artists who constantly revise and redo their work, Degas was driven by obsessive principles searching for perfection and greatly troubled by his failing eye sight but his determination to capture what he saw of ordinary life was evident in every mark he made. Never fully satisfied with the ‘finished ‘ product, many of Degas’ drawings and sculptures were kept in private during his lifetime.

From 1855 he studied at the Ecole des Beaux-Arts under Louis Lamothe for about a year until his trip to Italy. We learn of his relationship with and influence by the great master Ingres and how he drew and copied works by the great Renaissance artists. He became known as a great draughtsman and constantly developed his technique . Degas was always experimenting with new techniques and the lessons learnt from studying the past masters .

Many of his works are shown .. from early historical works (eg Young Spartans ) and the early major works The Bellelli Family and A Cotton Office in New Orleans. We see the nude bathers, the racecourse paintings,  other society portraits, depictions of café life and his extensive portrayal of dancers at the Paris Opera which he is well known for.

We also see the prints he produced and some of the sculptures (the exhibition has both wax models and bronze sculptures. Particular mention is made of Young Dancer Aged 14) and we see how the sculptures have been X-rayed so we can follow how they were created .

We also learn about Degas’ personal and political life. To us his outspoken anti-Semitism is now quite disturbing and he agreed with those who opposed Dreyfus .

Degas ‘ sad last days are described and his current popularity, influence and legacy are examined. An intriguing, informative film.