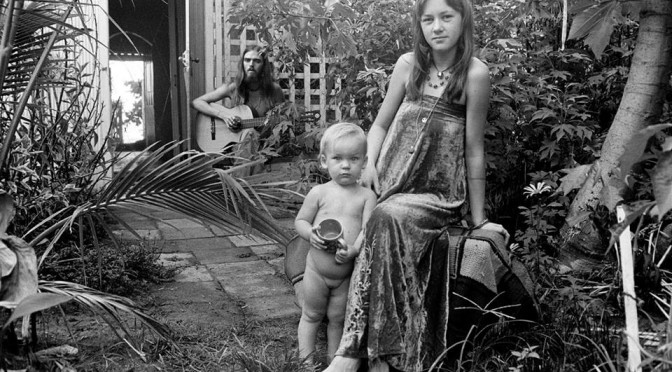 On Saturday April 5, the Monash Gallery of the Arts opened the Rennie Ellis Show and a showcase book of Ellis’s photography, DECADENT:1980-2000 was launched.

As the captivating chronicler of social change in Australia in the last two decades of the twentieth century, this big bold, bound in gold volume brilliantly illustrates how Ellis came face to face with the see and be seen syndrome; the excesses of hedonism and indulgences of wealth.

Alter egos come out of the closet and inhibitions fly out the window.
“I refer to myself as a people perv”, he’s attributed to saying, and there’s no doubt he captured a lot of posteriors for posterity, snaps of snatch, clicks of pricks, post box Brownie boobs.

But there’s so much more than flesh photography here, with Ellis’ own intuitive take on the Australian iconic – beaches and bars. Architecture and landscape get their due, too, but it’s people that preoccupy Ellis’ focus, particularly the female form.

Fellow photographer, Robert McFarlane, in an essay contained in this exquisite volume, muses that Ellis is ultimately most celebratory in his portrayal of female beauty.

“For this artist, women seem always a half step away from being goddesses- whereas men appear wedded to their physical strength and clearly visible sexual functionality.”

It would be surely most regrettable if Rennie Ellis’ photographs did not survive. Thankfully, the plates featured in DECADENT, ensure they thrive.

In her forward to the tome, Manuela Furci, Director of the Rennie Ellis Photographic Archive, hopes that this book of photographs will, ‘continue to taunt, titillate and tickle our collective fantasies for years to come.’  I should think that this hope will be realised.

DECADENT published by Hardie Grant Books is retailing at $69.95