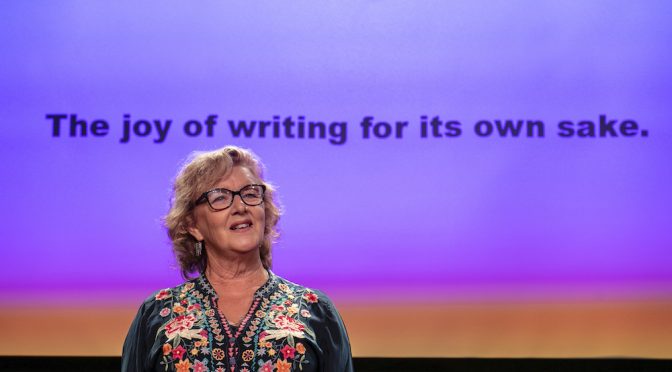 The joy of writing for its own sake. What a thought. Surely people don’t do this kind of thing  when we live in such a material world.

Well, writers and artists in general, are a strange lot. They sometimes do!

Take, for example, the pop music industry  Legends like Joni Mitchell and Van  Morrison. Mitchell said that she didn’t want to make records for the hit factory, and made ever more obscure and fascinating albums. Morrison, the wild, grumpy Irish genius genius, famously said to his audience in his classic live album ‘Too Late To Stop Now’, “now for the best, later for the garbage”. Van should have had more faith. He is still making great music, in his own unique and uncompromising style. Two artists with principles.

Contrast the attitude of these artists with this. I worked for quite a few years as a Court Officer at the Downing Centre.  One day there was a break in a civil court case with the Magistrate going off the Bench to prepare his Judgment. The court was empty apart from one of the lawyers, and we were just chatting away, and then, without batting an eyelid, he told me, “David, I make my money out of people’s principles. People squabbling, and having to prove that they are in the right”. Mr Lawyer, where were  your principles?

Back to Debra’s show. It was a warm, entertaining production  as she shared stories from her life. It was just her on stage with archive boxes to either side, and a screen behind her on which slides taken from her life were projected.

Mostly she spoke about her journey as a writer. Debra’s writing began  with her love of theatre. She was only eleven years old when she saw her first play, and told us that she has been in love with the world of theatre ever since. In a lovely touch she is performing her show, for the very first time, at the Stables Theatre, the venue where she saw her first play.

Debra’s career has been a, broadly speaking, successful one. Numerous plays have been produced, novels published, and she has been responsible for a number of television shows, most notably the Channel Ten series ‘Offspring’ which had a large cult following. She heard of how group of friends would get together for ‘Offspring’ nights where they would enjoy the latest episode.

It was in Debra’s sharing of the darker side to a writer’s life that the show truly came into its own. At one point she grabbed numerous manuscripts from various works she has written, and threw them onto the stage floor. The one thing that all these works had in common was that none of them has, as yet, had seen the light of day.

All those story lines. All those characters she had created and grown to love. Kind of stillborn.

How exasperating would that feel? One can only begin to imagine!

Debra, keep writing. Write because you have to. Write even if a lot  of the works doesn’t come to life. Write for the mystery of it all, never knowing when a producer might pick it up and run with it. Write for the sheer love and brilliance of it.

Write because we love what you write.

Debra Oswald’s IS THERE SOMETHING WRONG WITH THAT LADY?, directed by Lee Lewis with lights by Ben Brockman and sound by Jessica Dunn, played the SBW Stables Theatre between Tuesday 13th April and Saturday 24th April, 2021.