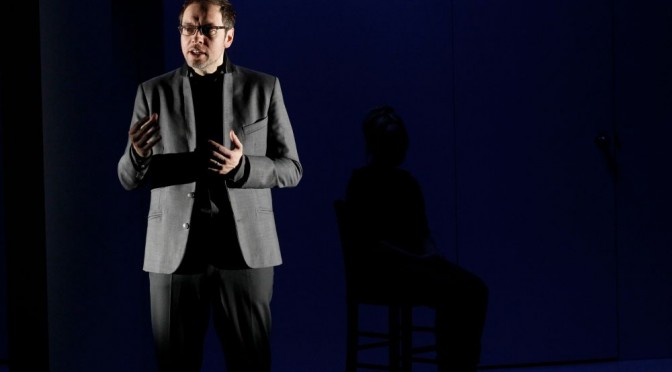 We  are in an unspecified country that is just waking up to democracy after many dark years  of having been governed by a brutal totalitarian regime.

After years of suffering,  everyone is still living on edge. As is Paulina Salas who is startled when she spies the headlights of a car that she is not familiar with pull in the driveway.

Paulina is relieved when her husband Gerardo comes in through the door. They embrace and Gerardo explains what has happened. His car broke down on the way home.  He was  standing by the side of the road and a lovely gentlemen by the name of Roberto picked him up and gave him a lift home. He will go and pick up his car in the morning.

This comes across as a, relatively speaking, mundane, routine domestic scene. Then there is a knock at the door. Roberto has returned. He has come back with Gerardo’s spare tyre that he forgetfully put in the boot of  his own car.

Gerardo  invites him in for a drink. The two men start chatting away. Paulina listens in to their conversation from another room. She starts  freaking out.  There is something about Roberto’s voice….It is the same  voice  as that of her torturer during the regime’s darkest days.

The play then dramatically changes scenes and rooms. Roberto is tied up to a chair and Paulina is blazing away at him….When Gerardo walks in on the scene, he just can’t believe what he is seeing….Has his highly stressed wife finally gone barking mad? What the hell is going on?!

So there you have it…the set up….You will have to see it  for yourself to see how it plays out.

What I can tell you is … this Ariel Dorfman play is a masterwork. It is one of the finest dramas  I have seen in a quarter of century of writing about the theatre.

DEATH AND THE MAIDEN has a long, distinguished history. It had its world premiere at the Royal Court theatre upstairs in July 1991 with the wonderful Juliet Stevenson as Paulina.

It opened on Broadway in March 1992 with a stellar cast featuring Glenn Close, Richard Dreyfuss and Gene Hackman.

In 1994 Roman Polanski made a feature film of the play starring Sigourney Weaver, Ben Kingsley and Stuart Wilson.

It has been performed regularly on stages around the world for many years.

The current Sydney Theatre Company production is the second time that the state’s main theatre company has brought it to one of its main stages. Its  previous incarnation, some years ago, was with Helen Morse in the lead role.

The play calls for a very taut ‘Sturm and Drang’ production which director Leticia Caceres delivers in the main, barring a rather ineffective, poorly realised denouement.

The performances by Susie Porter as Paulina, Steve Mouzakis as Gerardo Escobar and Eugene Gilfedder as Roberto Miranda are first rate. They must be fascinating roles to play as Dorfman imbues each of these characters with ambiguity, mystery, many sides…