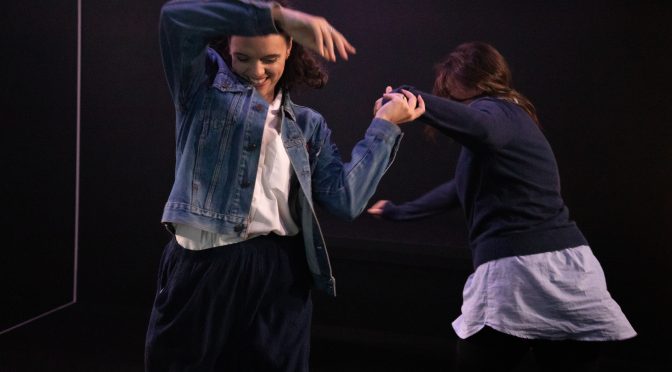 DEAD SKIN is an impressive piece of Australian naturalist theatre, all the more so as it was written by a 17 year old.

The two main female characters, both 17, are not stereotypes, neither is their infatuation with a girl/girl relationship. They speak in uncanny realistic elocutions, the plot although unfamiliar for many in the audience remains plausible, and characters and story are allowed to emerge through careful construction of language, scenes, and mise-en-scene. The carefully wrought script gives all cast space and impetus to act, and they rise to the occasion.

Laneikka Dene shines in emotional and mental veracity to her alter ego Andie; and Ruby Maishman is drop dead funky and gorgeous as Andie’s wanna be partner in crime, Maggie. Camila Ponte-Alverez is seamless as the partner trapped under a very big pile of Andie’s past baggage; Sarah Jane plays the rival character Andrea with dexterity, and finally Abe Mitchell is convincing in the quite difficult, anxious male role of father, husband and partner, Henry.

Since when in the history of theatre was naturalism (or realism) identified with three acts and as many rooms, or less, on a proscenium stage? The evolving discourse that is the story’s trajectory does not occur neatly in proscribed boxes. Even if naturalism was correct to observe actual time and space of encounters (and minimise acts of good and outlandish plots), these can be distributed across many locations and punctuated by non theatrical noises, events and surroundings.

While Laneikka Dene set many scenes in a corner convenience store, this setting is not realised so as to dominate action. Angus Consti and Martin Kinnane produce a stunning black and white abstract set, with strip side lighting, one multi function table box, and multiple television screens on one wall. The latter broadcast in large, repetitive font off text titles that commence every scene. The titles jolt more than connect, and they are not functional. The displays also ingeniously add elements of the shop – becoming at one time a CCTV array, another shovels which can even be opened.

Some lovely video montages of indirect glimpses of persons and situations are included (Roger Stonehouse). To that Chrysoulla Markoulli adds sound that does a lot more than underscore or illustrate the dialogue. The outside impinging on dialogue, which is not presented in a vacuum of privileged realism but something struggles for its authenticity, its time and space, against other pressures. Televisual style it might be, but it does not serve to package up talk into neat narrative nuggets. Talk spills, expands, in emotion, in thought, into a trove of youthful linguistics and gestures that delight in their ethnographic authenticity.

What does please about this work is the tender realism that informs its approach to sexuality. The possibility of a female relationship arises with all the fleeting enthusiasm, hesitation, girlish play and honesty one could expect from the age group. The characters come to this possibility, and Andie is highly motivated to, due to long unresolved tension about her lost mother’s identity. Why wouldn’t you seek whatever source of happiness was close at hand in such circumstances? The play does not treat sex in anything other than a convincing dramatic way – there is no sense of ideological or cultural pressure or trope de jour.

The play is fiction. The author has maintained a mature detachment from the realities that were close to her. One could wonder about the sudden exit of Maggie from Andie – although the story of Henry and her mother made this necessary. Maggie’s talk was a bit literal after all the nuance that preceded – however the last gestural approach and retreat, taking a full minute with almost as much silence, was a true directorial gem.

Kim Hardwick displays great skills and verve in directing this achievement, in particular with a cast, some young and some newish to theatre. She must be doing something right to continue to push out shows of this quality from the White Box production entity she and Martin Kinnane run.