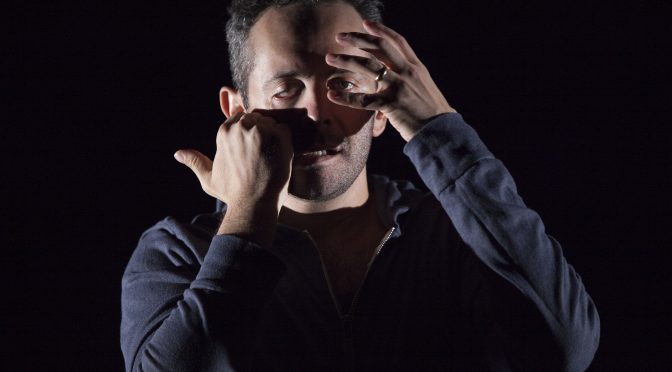 This Australian premiere production is a  co-production involving Quiptake, Pandemic Theatre and the Theatre Centre, Canada. DAUGHTER, written and performed by Adam Lazarus and directed by Ann-Marie Kerr,   is a collaboration uniting the three organisations’ shared values of complex, challenging and aesthetically driven critical performance to provoke and hold space for civil discourse.

So here we are. In the middle of #metoo and mens whiny #methree, cos they don’t want to miss out. Because really they don’t understand. Adam Lazarus in developing this piece of theatre with his training and background in the ‘buffon king’ and hailed as Toronto’s favourite nasty clown; has taken us down a very ugly nasty road upon which he declares we have all travelled – or indeed travel still. The Bouffon, or clown, the fool of Shakespeare’s Lear, are all a little too blunt and too honest and too real. Too real to be believed. Yet Lazarus takes us on this inane and simple journey of real truths. His truths. Credible and funny and relatable. Then he gives a little slap or a digging in the ribs hard nudge. Too hard and too fast. No that is not “us”, we would never, could never. No don’t do that, don’t say that – we gasp and wince and scrunch our faces in distaste. One man near the front leaves. The two women in front of me whisper and give each other looks, then they too exit.

So yes, the subject matter is intense. Grotesqueries and extraordinary experiences are Adam’s themes of choice. Yet he relay’s them in such a way, teasing his audience along. “You’ve done that? You know exactly what I mean?” Then quickly singling out someone with a deliberate finger point or a look and making it clear we are all in on it. Been there done that. But we haven’t. I haven’t. I can’t even stomach the ideas. Who near me can? I wonder. Fleetingly. Inside I ‘know’ this is theatre but Adam is telling a real story isn’t he. His story. I think. I don’t like it. I don’t like him.

The key to this version of theatre making events, is the teller. He is charismatic. And simply believable. He has chosen, the producer says, deliberately, to weave these ‘creation tells*’ around a truth. He does have kids, a wife, a marriage and is a certain age that telling us about past experiences, we go there. And then he hits hard. Too much truth. Too much story.

Is it timely that we are presented with this mirror held up to the whole room? Everyone in the audience tainted. The creators have made sure that we thought he was a bit of a clown. A funny guy. A believable dad. In so getting us to like him they then wanted to make any dislike less possible. Or was it to have us forgive his actions? Was it easier in the beginning? Nearer the nice guy we thought he was? Then the layers of stories. Were any of them forgivable? I don’t think so. Does anyone else in the audience think so. Do the men in the audience think so?

A greater awareness and a dialogue began before 2017 and Harvey Weinstein. This one man monologue play was developed in 2016. Each and every audience has been invited by the producers to hold a conversation after the play. I stayed only a little to hear the producer. Her words about the history of the play and its makers. Its origin story in essence. Then It did begin, cautiously at first, the dialogue with the audience. Then straight to the content and context. I must say also about a third of the large opening night house came to listen. People were intrigued and certainly some disturbed. But is it time we not only hear these stories, but time too to know they are about us?

Why do men feel threatened by women?

They are afraid women will laugh at them.

Why do women feel threatened by men?

They are afraid of being killed.

DAUGHTER  is playing at Carriageworks till the 13th January, 2019.

If you would like to discuss the production and its themes, the producers will be available to chat after the show. Please see the ushers to be directed to the correct room.