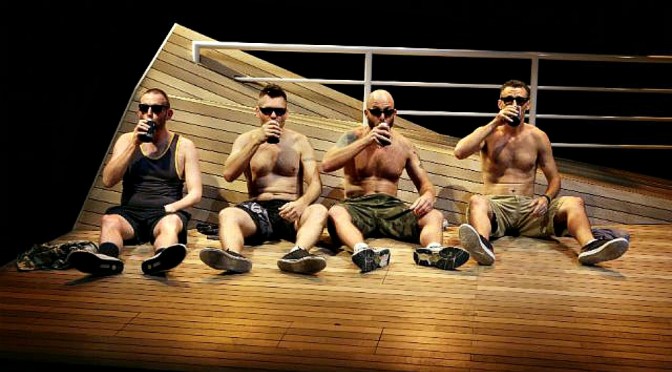 Lights down, the play commences, but not to open on sunny, sea spray, seagull strewn skies, but darkness and haze as four figures, male, are expelled onto the stage, fetal first then unfurling fully formed, product of a primordial soup.Lights up on the four fellows, pumped with the anticipation of leaving all their weary woes on shore as they cast off on a cruise of careless abandon. Exuberant fun loving lads, three of them sun loving dads, all of them deluded, unloving cads.

Alpha male, Craze, (Yure Covich) is in a deluded daze that his divorced spouse is still an open house for him.

Rabbit, (Josef Bur) nick named for his root rodent proclivity, is deluded that his wife is clueless to his shagging shenanigans.

George, (Troy Harrison) is in denial of a new love, still devastated at the dysfunction of his previous relationship and the perceived abduction of his child, taken across the Tasman to a new life devoid of dad.

And Runt, (Thomas Campbell) the literal of the litter, a frustrated follower, aware of his own discrepancies, happy to abrogate his responsibilities.

Mateship, masculinity and misogyny is the focus as four, near forty year old, phallus centric fellas as they flounder in the forged conceit of male entitlement.

They all love women they say, they all love their mums. But when one character depicts admiration for his dad because he hurled his mum across the room, he is not chastised, and no one is chastened. Blokes are supposed to be the boss, and for these blokes being a man is being a hard man, a literal and metaphorical hard-on, homo-erectus in his most primitive and primeval state.

Ugly topics couched in poetic language are part of a long list of literary legacy in English language plays from Shakespeare to Berkoff and Patricia Cornelius script is right up there among the very best of them.

Her writing has a rhythm, energy and truth that wields unbridled power and in the hands of these actors packs a powerful performance punch. The brash playfulness of boys will be boys banter mutates into male malevolence towards women. It’s a chilling achievement, spotlighting how these attitudes can be fostered and festered, how predatory and punishing actions are accomplished by men who attest emphatic belief that they love women but join in on pack mentality misogyny.

SAVAGES plays the Eternity Playhouse until the May 1.