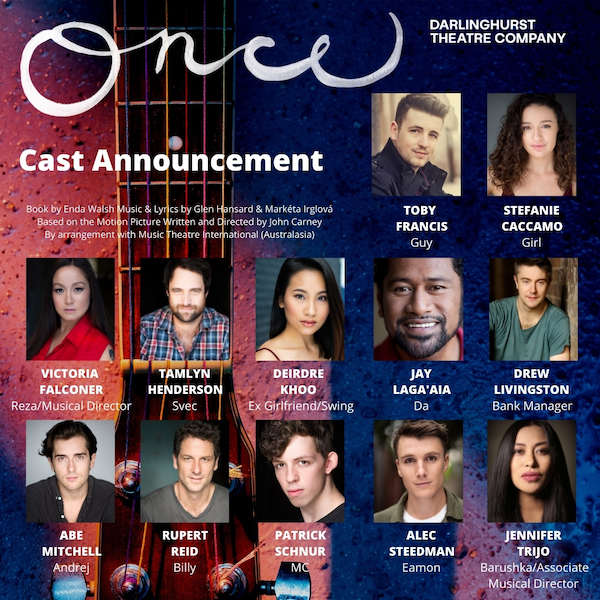 Darlinghurst Theatre Company (DTC) is thrilled to announce the cast of the Tony Award®– winning musical ONCE, which makes its long-awaited return to Sydney’s Eternity Playhouse in June before touring around the State.

Opening in Sydney in 2019, it broke box-office records and played to nightly standing ovations and packed houses.The sell-out season had to be extended due to popular demand.

Performing alongside Francis, Caccamo and Laga’aia will be Victoria Falconer, Drew Livingston, Abe Mitchell, Rupert Reid, Alec Steedman, who are all returning after performing in the original 2019 season. They are joined by newcomers, Tamlyn Henderson, Deirdre Khoo, Patrick Schnur and Jennifer Trijo, who is also Associate Musical Director.

Award-winning director Richard Carroll considers ONCE to be one of the most challenging musicals for the artists involved. “It asks for so much from its actors. Not only do they need to tell this beautiful story every night with truth, passion and humour – they also need to sing the exceptional songs with all of the same qualities. AND they are their own band, so every one of them needs to be an exceptional instrumentalist. I was blown away by the capabilities of the cast and creative team we assembled for ONCE in 2019, and I can’t wait to do it all again for the entire country to see.”

Tickets for the Sydney season and New South Wales tour are now on sale, with further dates to be announced soon.

2 – 4 September at the Orange Civic Theatre:

8 – 11 September at the Civic Theatre Newcastle: