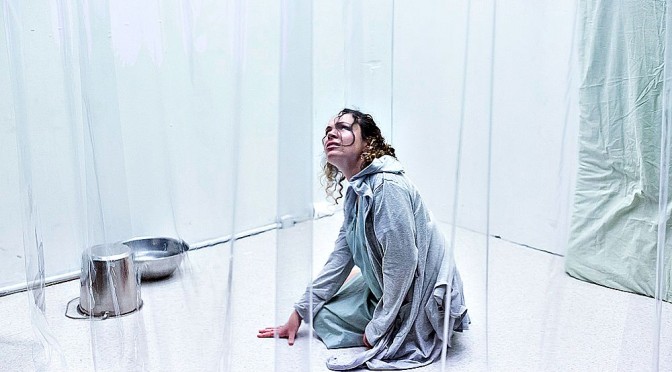 Andrea is stung by a wasp in the neck and her mother tells her this is the wasp’s way of telling her she loves her. This is an early drama in Andrea’s life and one of many lies that Andrea is told by her mother, by other relatives, by her friends and by her lovers.

Andrea, played brilliantly by Claudia Barrie, tells her story in a harshly lit cell to the two cameras that constantly monitor her. We very quickly pick up that Andrea is an excellent storyteller.

This fifteen year old character has many harrowing and distressing stories to draw from and although she does not always grasp the full significance of her anecdotes she relays them all with a  full and rich honesty.

Andrea’s harrowing tale is not completely bleak and contains plenty of humour, romance and teenage angst. Andrea’s observations are often insightful and although she gets distracted by different threads of her story they are invariably interesting and relevant.

Surprisingly, for a one woman play, this tale contains many interesting characters that range from good, bad and to indifferent. Andrea relays what these characters said or did so that we meet a full cast of diverse personalities.

The plot is told substantially in flashback and although her location is never explicitly revealed we surmise that it is likely to be from the psychiatric ward of a prison hospital. Occasionally she addresses her captors directly, often with a torrent of abuse.

DARK VANILLA JUNGLE is a wonderfully written play by English playwright Philip Ridley and this production by the Mad March Hare Theatre Company has fully realised the dramatic possibilities of this excellent piece of writing.

The direction by Fiona Hallenan-Baker and Emma Louise is excellent. Emma Louise is also the vocal coach and has combined wonderfully with Claudia Barrie covering various accents and ages.

One of the attractions of this venue is finding the nondescript door, getting buzzed up, taking the lift or stairs to the 5th floor and then winding your way through a fascinating maze to the theatre entrance.

DARK VANILLA JUNGLE opened on the 2nd September and runs until 12th September at the Old 505 Theatre, 505/342 Eizabeth St, Surry Hills. The show is playing as part of this years’  Sydney Fringe Festival.