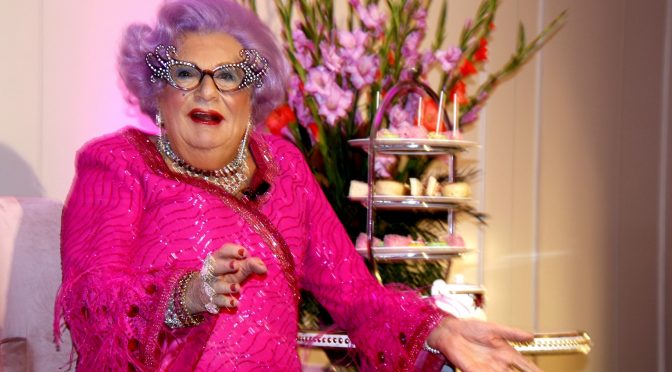 Dame Edna bounced into her media conference with more headlines than a New Idea magazine cover, both of equal voracity.

The biggest news was after her husband Norm had died from being prostrate from his prostate  and further more after years of widowhood she had met a lovely new man in Mexico called Thomas Markle. She further confirmed that this was indeed the father of Megan Markle and that if she married him she would be 17th in line to the throne.  She further announced that she was the godmother to Archie and that he had red hair both on top and the bottom!

A normally serious media pack were in stitches as her acid dipped in honey wit and wicked societal comments percolated through the room.

Like Dame Mellie Melba, Dame Edna has emerged from retirement stating  ‘retired? I was only kidding possums!’.

In fact there was a more ‘serious’ reason for her re-emergence into the public eye.

It seems that her manager Barry Humphries  like Leonard Cohen’s manager had his hand up to his armpit into Dame Edna’s savings. As a result she also had to close down many of her charitable institutions  including her beloved  Friends Of The Prostate.

When asked what was the secret to motherhood, she replied…’Neglect!’. As a result she learned that her son had married a husband and her daughter had taken a wife. She did say however that she was adjusting quite well to this new situation.

Dame Edna also announced how pleased she was to be back in Australia amidst so many smiling faces. She further opined that she was in Sydney ‘which may catch up to Brisbane’ in a few years time. In an off the cuff remark she stated words to the effect Sydney’s social scene and its nightlife was an oxymoron.

I have been a fan  of Dame Edna for almost all my life. I remember that either 2GB or 2UE used to host a comedy hour at 2am which often featured Dame Edna’s recordings. I told her how much these recordings relaxed me from the stress of studying for my Higher School Certificate in 1967.

I also told her that I first sae her perform in 1970 on the Phillip Street Revue, now long gone. I then asked her how she kept going after all these years with such energy and vitality.

She told me that she adored being on stage. She also said that every time she returned there was a new generation to entertain.

Dame Edna will be touring throughout Australia from mid September to mid December.

She will be in Sydney at the Darling Harbour Theatre, ICC Sydney on Saturday 28th, Sunday 29th September and Saturday 5th October.

Dame Edna will bookend her Australian tour with appearances at the Coliseum Theatre, West HQ on Wednesday 18th and Thursday 19th December at 7.30pm.