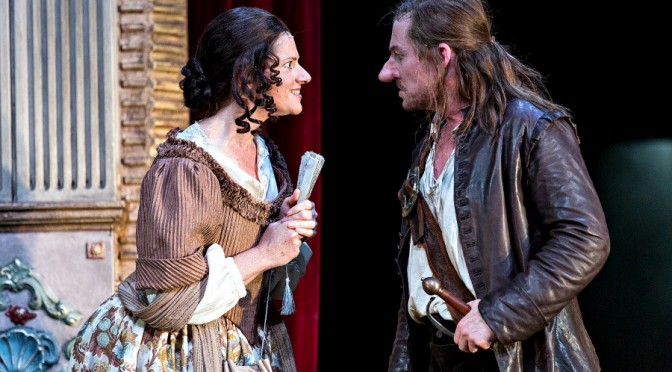 French playwright Edmond Rostand’s CYRANO DE BERGERAC (1897) is one of the all time, great works of World Theatre. Prestigious theatre companies love to have a crack at it, and give audiences a night to remember.

The great plays have exacting standards,- the bar is raised to its highest level in all regards. Particularly, revivals require actors of the highest calibre to perform the main roles, otherwise the production will simply fall away and audiences will go away feeling shortchanged.

Richard Roxburgh steps into the coveted shoes of the great swordsman and poet, Cyrano with verve panache. He is every bit the passionate, charismatic, perfectionistic, deeply moralistic, heart-breaking swordsman and poet.

Eryn Jean Norvill plays the part of Cyrano’s flame and muse, Roxane. Eryn has a large arc to transverse through the play, from being a superficial girl-woman to a mature, more considerate woman.

Chris Ryan is convincing as Christian, a young, hedonistic man who thinks about things with much more depth after his friendship with Cyrano.

Josh McConville displays great stage presence as the prickly, cruel Count de Guiche who learns to be more humane as the play unfolds.

These main players are well supported by a cast that includes Bruce Spence and Julia  Zemiro.

The show is cleverly staged by director Andrew Upton along with his designers, Alice Babidge and Renee Mulder. Good use is made of the large Sydney Theatre stage.

The main stage is flanked stage left, right and rear with raised catwalk for the players to transverse, when needed. The area is used very flexibly,- with the use, for the first three Acts, of a raised stage, on wheels.

Act 1 features a  proscenium arched theatre with red curtains in the centre. (The play begins at the theatre in the Hotel Burgundy). In  Act 2, the stage is rotated about 45 degrees into the the patisserie setting. The third Act sees the raised stage being rotated some 180 degrees to become the famous balcony setting at Roxane’s home. In Act 4, the raised stage is removed, and the stage becomes the battlefield setting at Arras. Finally, in Act 5, we are at a convent outside Paris.