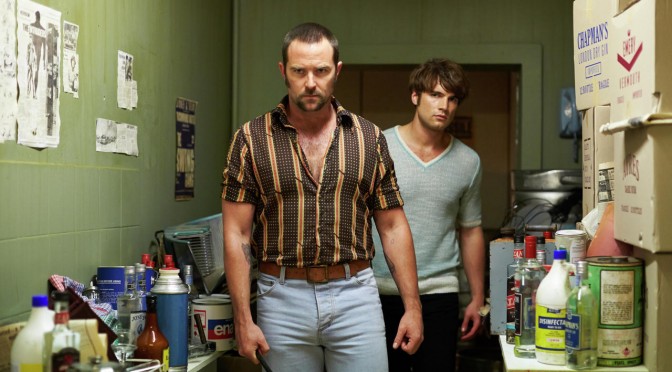 A great new Australian crime thriller is ready for our cinemas and screening from 24 September 2015, and has an unexpected take on the motivations for committing crime.

CUT SNAKE is an incendiary noir drama, set in Melbourne  circa 1974. Merv is a man  from Sydney with a past that he wants to run away from. He has moved to country Melbourne with the intention of trying to build a new life.

Suddenly he finds himself tracked down by old friend James and is dragged back into the criminal world, where both are only known by their criminal nicknames.

James and Merv have a bond from sharing a prison cell in the past, and  the impact that sexual violence in prison  has had on them starts to come to the fore.

On James first night out with Paula and Merv – James borderline ability to control his seething anger issues, suddenly evaporates because of the drag queen emcee. James discreetly robs the gay bar, which starts the roller-coaster ride of emotional reactions that leads to revelations, and further violence.

Director Tony Ayres and screenwriter Blake Ayshford have crafted their take on crime in a similar style to another great Aussie movie,  Animal Kingdom (2010). The movie is uneven at times but is always quirky.

Sullivan Stapleton stands out in his performance as the brooding, dangerous antagonist James.