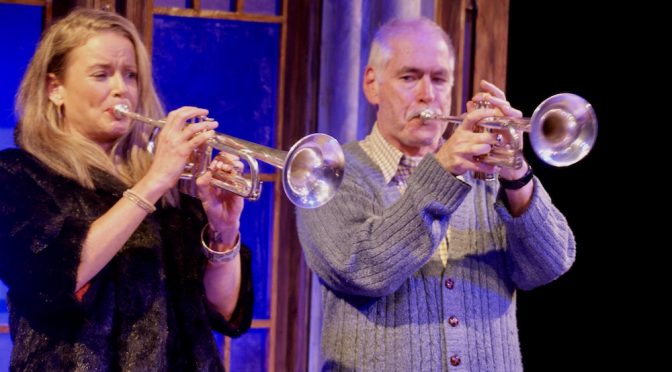 The subject of Crying Chair Theatre’s double bill  at the Flight Path Theatre is the twilight years of our lives, that time in our lives that we are at our most vulnerable.

We worry whether we will we be able to retain our independence and stay in our home or will we become too frail and end up in a nursing home with our dignity and privacy greatly challenged?!

It is the nature of dramatists to tackle life’s harder subjects. Theatre from time immemorial has proved to be a popular place to explore the darker aspects to life. And hopefully bring some light to them.

Dot is an elderly woman who has recently had a stroke which has left her severely impaired. She walks very gingerly and has to support herself with a cane.

She has become very dependent on her daughter Liz who now has had to spend much of her time caring for her.

Dot is, putting it squarely, just miserable. In her prime she was a very feisty, independent woman. She can’t bear what has become of her.

She pleads with her daughter to put an end to her life. Dot has lost the will to live.

Liz tells her mum that she  won’t do it. She has to make the best of things.

She will be there for her. But..she tells her that she still needs some time of her own.

A kind of impossible situation. A battle of wills. Can the two come to some sort of peace?!

Richard Cotter directs the action well and wins good, sensitive performances from Tricia Youlden as the mum and Emma Dalton as her daughter.

Jacinta Frizelle designed the lights and sound, Allan Walpole came up with the set, and the edgy soundscape was by sodacake.

Workman’s writing was uncompromising and confronting. I wasn’t a fan. The darkness was unremitting. The play didn’t bring any light with it.

It was good to walk out of the theatre, and take a bit of a break. I was even happy to get some fresh air, as cold as it was!

I am happy to report that I found that the second play, BIG HORN, an early play by another Australian playwright, Paul Rogers, worked better as a piece of theatre.

Richard Cotter plays the irrepressible, cantankerous Ray Bold. Ray has seen better days. He has lost his wife and his son and now looks as though he is going to lose the family home. The government want to take it back.

There are two people that remain in his life. They are his daughter in law Cate and a young woman who is his carer during the  daytime, Maxine. He jousts with both of them.

Cate pleads with him to face reality and go into a very  modern nursing home with all the latest facilities. Ray will have nothing to do with it.

The patience of both women are truly tested.

Tricia Youlden directs the  action well. Performances are good. Mel Day is the caring Cate. Eloise Martin-Jones gives a charming performance as Maxine. Emma Dalton has fun in a bit of a cameo role as a lady of the night who Ray hooks  up with.

Rogers play pivots around his colourful, redoubtable  main character, Ray Bold, who says up ‘up yours’ to the difficulties that old age bestows upon us. Richard Cotter gives a fine, well textured performance in the role.

The play features a neat twist near the end which is in line  with Ray Bold’s and the play’s anarchic feel.

Kudos to Emma Dalton and Mel Day and their company  Crying Theatre  for putting on work by Australian playwrights, and producing work that, in the better spirit of theatre, challenges audiences.