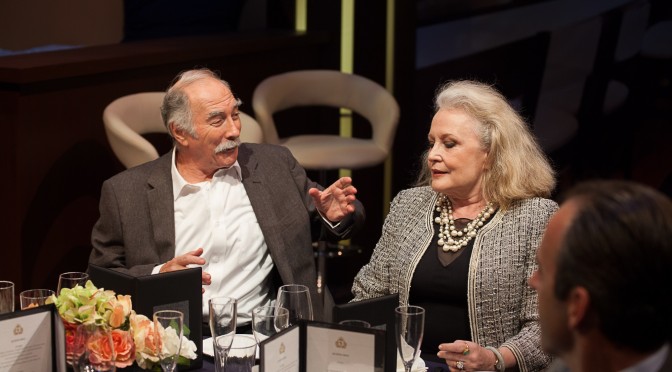 David Williamson has gone for clever comedy, with a touch of the macabre, for his latest play, CRUISE CONTROL. Australia’s premiere playwright draws on a cauldron style scenario: Throw a group of very different people together, have it so that they can’t get away from each other, and then see how things play out.

The hothouse environment is on the cruise ship, Queen Mary 11, which is doing a seven night crossing from London to New York. Three very different couples come together each night in the main dining room and become increasingly entangled with each other. There are plenty of surprises in store for audiences with an intricately woven plot.

The standard of craftsmanship across all areas of this production is high. The writing features Williamson’s wry satirical tone and his usual array of one liners.

A hallmark of a Williamson play is the way he paints the world of his plays, the milieu, so clearly and this is again the case. CRUISE CONTROL is anchored in another exceptional, compact set design by Marissa Dale-Johnson and is then embellished by the portrayal of the cruise ship lifestyle- the endless drinks…mediocre cabarets…art auctions…et al.

Williamson gives his stellar cast a rich range of well drawn characters to portray. The best role goes to his stepson Felix who plays the snooty, sleazy, waspish, Tartuffe like novelist Richard Manton. Michelle Doake is his much more compassionate wife, Fiona.

Recommended, CRUISE CONTROL opened at the Ensemble Theatre, 78 McDougall Street, Kirribilli, on Wednesday 30th April and is playing until Saturday 14th June. This season has already sold out.

The production is then playing a short season at the Illawarra Performing Arts Centre (IPAC) between Wednesday 18th and Saturday 21st June, and the Ensemble has announced there will be three further performances of the show at the Concourse, Chatswood, on Saturday 24th and Sunday 25th June.

One thought on “CRUISE CONTROL”