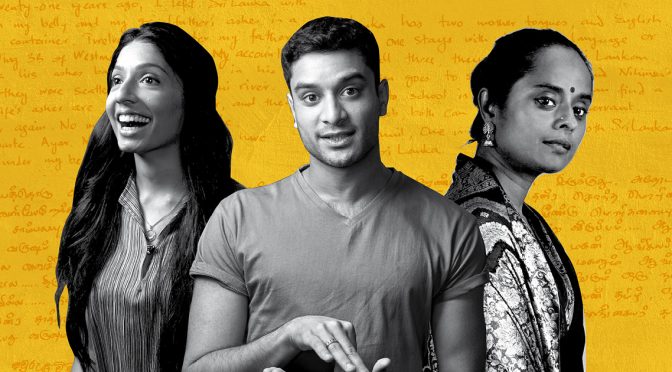 COUNTING & CRACKING is a Sri Lankan story made into a powerful stage play about a family’s journey to remain united across countries, and across generations following a long-term civil war that claimed the lives of over 100,000 people.

It is an emotional tale about a family torn apart by the war, going back and forth in time to tell this story using an international cast of 16 actors from 6 countries playing four generations of a family. The play is performed in six languages and translated simultaneously.

Director Eamon Flack took up the challenge to work with playwright Shakthi Shakthidharan over a period of 5 years to make this production possible.

Shakthi researched the story of his Sri Lankan great grandfather and went to great pains to discover the truth about what really happened there over time. He eventually found out what brought his family to Australia and gradually began to grasp his own history in the making. The information was invaluable in piecing-together his roots, and developing this into a realistic story about coming together, and breaking apart.

This is an Australian story, but much of it takes place in Sri Lanka – covering four generations of a family that included Tamil and Sinhalese members. A one-time harmonious race was divided by a civil war that broke out in 1983 where a Sinhalese (Buddhist) majority over-ruled the Tamil (Hindu) minority. The official language and medium of instruction in Schools and Offices had changed from English to Sinhalese and the island’s name also changed from Ceylon to Sri Lanka. The` Sinhala Only’ policy dominated the country, making it hard on the minority ethnic groups that included the Burghers (a colonial mix) and the Muslim population.

A large percentage of Tamils who resided in the northern part of the island were pushing to make it an independent province, but without much success. A Tamil insurgency gathered force and a full-scale war resulted.

Shakthi’s great grandfather had entered politics, but soon became disillusioned by the state of affairs in the country at the time. He died in 1985 leaving his home in Colombo to his grand-daughter, who had to flee the hostile country with her infant son, finally ending up in Australia.

Inspired by his grandfather’s journey, Shakthi began writing his script about people’s lives and the decisions they make. In particular, he looked at the racially driven politics in Sri Lanka and the tiresome efforts of his family to come to terms with it. The back and forth journey dwells into both past and present lifestyles and traditions moving from one generation to the next. As the story is told the pathways to reconciliation opens up with traces of hope for the future.

The play is a mammoth project with commendable results. In 3 hours and 30 minutes, the duo – writer Shakthi and director Eamon Flack successfully staged this remarkable collaboration between Co-curious and Belvoir at Sydney Town Hall to a full-house at every performance.

It is an ambitious, thought provoking production that transformed the Town Hall into a bustling theatrical space with a flurry of talented performers playing different characters at a cracking pace. There is a mix of humour, intellect, emotion and excitement as the actors move from one role to the next, speaking several languages (translated simultaneously) to the synchronised lighting, sound and music. The 3 musicians brilliantly used their Sri Lankan instruments to highlight each scene very effectively.

As an added extra – for the price of a ticket, you get to sample traditional Sri Lankan cuisine served by Dish Dining & Events – an authentic Lankan restaurant in Toongabbie & Glebe.

COUNTING AND CRACKING is playing at the Sydney Town Hall till the 2nd February, 2019.