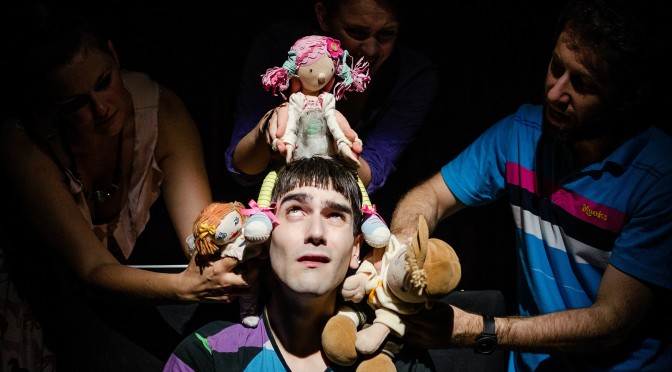 Emily Calder’s play commences with three children, represented by children’s toy dolls, playing in a sandpit. These dolls are manipulated by three actors who also adopt children’s voices for the dialogue, initially about an insignificant playground struggle. A patronising offstage childcare voice (Sandra the centre manager) reprimands the children about their squabble.

The three actors manipulating the dolls then step back from the sandpit and play the parents of Jess, Isla and Finlay. The parents, Julie (Melissa Brownlow), Isabelle (Vanessa Cole) and Clive (Tim Reuben), wonderfully represent the parents of young children. They discuss the behaviour of their fantastic children, the good and bad aspects of the other parents and all the usual topics of schoolyard discussion.

The parents all believe their children are unique and marvelous but they also convey the insecurity felt about whether they are raising their children with the right balance of intervention and freedom. The script, direction (James Dalton) and acting explore this path in a thoughtful and humorous manner.

The three main actors oscillate between playing the children and the parents. When they play the children they are holding the dolls and speaking with childlike voices. As adults they step back and return to adult dialogue. An element of discord is introduced by the manipulative and imaginative child Frank, skilfully played by Tom Christophersen, who scares and torments the group.

Frank personifies the risk and exhilaration of entering our beautiful and frightening world. The world of make-believe allows us to embrace freedom and imagination but when but when risk and danger are confronted how much regulation do we want?

Sound, lighting and the set, by Tom Hogan, Benjamin Brockman and Becky-Dee Trevenen respectively are all innovative and contribute to the drama and joyous hysteria of the performance. Unfortunately the theatre was hot and airless and did not cope well with the lights and fog, detracting a little from an otherwise very creative and entertaining evening.