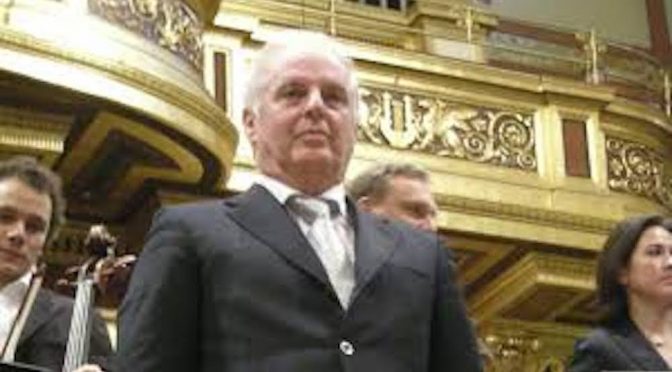 Daniel Barenboim has had a long and glorious career both as a concert pianist and a celebrated conductor.  He has been described as one of the great humanists and a person respected for his integrity and principles.

He was born in Argentina in 1942 to parents of Russian-Jewish descent.  He started piano lessons at 5 and at the age of 7 gave his first concert in his home town of Buenos Aires.  The family moved to Israel in 1952 and at 17 Barenboim performed his first cycle of Beethoven piano sonatas, something he has repeated over 30 times.  He conducted his first orchestra in Israel when he was 20.  Since then, he has been music director of the Paris Orchestra, Chicago Symphony and, his particular favourite the Berlin State Opera.  In Milan, the La Scala Theatre has created a special post for him – maestro scaligero – master of La Scala.  He has conducted the Vienna Philharmonic in its New Year Concert on two occasions, 2009 and 2014 and both times he announced the hope that that year would be a year of peace and human justice, particularly in the Middle East.

Barenboim’s recordings as a conductor include the complete symphonies of Beethoven, Brahms, Bruckner, Schubert and Schumann plus the Da Ponte operas of Mozart, several works by Wagner, including the complete Ring Cycle. The music of Mahler appears to be a problem for him although he has recorded Mahler’s Fifth, Seventh and Ninth Symphonies plus Das Lied von der Erde.  Barenboim also continues to perform and record chamber music, at times with the orchestras he has led.

Barenboim married Jacqueline du Pré, the well-known British cellist, in 1967 at a Western Wall ceremony in Jerusalem, du Pré having converted to Judaism.  Zubin Mehta was one of the witnesses.  Soon after their wedding du Pré decided not to accompany her husband in his many professional sojourns and her career ended in 1973 when she was diagnosed with Multiple Sclerosis (MS).  She died in 1987.  Unbeknownst to du Pré, Barenboim had begun an affair with Russian pianist Elena Bashkirova who bore him two sons, David Arthur (1983) and Michael (1985).  Barenboim believes that he successfully managed to keep the affair hidden from du Pré and he and Bashkirova married in 1988, a year after du Pré’s death.

Barenboim has had many tussles with the Israeli cultural bureaucracy in his many attempts to perform the works of Richard Wagner in Israel, where since 1948 the playing of Wagner’s music had been banned because of the latter’s perceived anti-Semitism.  In 1974 and 1981 Zubin Mehta had planned to lead the Israeli Orchestra in works by Wagner but it never eventuated.  In 1990 Barenboim led the Berlin Philharmonic in its first Israeli appearance but no Wagner works were performed.  Eventually in 2001, in a Jerusalem concert with the Berlin Staaskapelle, Barenboim performed the prelude to Wagner’s Tristan and Isolde’s as an encore and received overwhelming applause.

His contribution to a better world was conceived in 1999 when he met Edward Said.

Here, I quote from the obituary The Guardian newspaper ran after Said’s death in 2003. “As professor of English and comparative literature at Columbia University, New York, Said was widely regarded as the outstanding representative of the post-structuralist left in America. Above all, he was the most articulate and visible advocate of the Palestinian cause in the United States, where it earned him many enemies.  The West-Eastern Divan Orchestra he founded with the Israeli citizen Daniel Barenboim in 1999 grew out of the friendship he forged with the musician who shares his belief that art – and, in particular, the music of Wagner – transcends political ideology. With Said’s assistance, Barenboim gave master classes for Palestinian students in the occupied West Bank, infuriating the Israeli right.”

“I am trying,” he continues, “to create a platform where the two sides can disagree and not resort to knives.” What Barenboim is trying to achieve is how to get 100 musicians to think and feel alike. “….to get together and feel one huge common lung (so) that you breathe the music the same way.”

In July 2012, Barenboim and the Divan orchestra were rewarded by performing Beethoven’s Ninth Symphony at the BBC London Proms.  It coincided with the opening of the London Olympic Games.  Barenboim was also chosen to carry an Olympic flag at the opening ceremony for bringing ‘harmony in place of discord.’

In 2014 construction began on the Barenboim–Said Academy in Berlin. The academy was planned as a site for young music students from the Arab and Israeli worlds to study music and humanities in Berlin. It was officially opened on 8 December 2016.

He is the current general music director of the Berlin State Opera and the Staatskapelle Berlin, and he previously served as Music Director of the Chicago Symphony Orchestra, the Orchestre de Paris and La Scala in Milan.  He is an honorary Knight Commander of the Order of the British Empire, France’s Légion d’honneur both as a Commander and Grand Officier, and the German Großes Bundesverdienstkreuz mit Stern und Schulterband.

On June 4 this year, Daniel Barenboim released a new album presenting four works by Claude Debussy. The album features Barenboim in the roles of both pianist and conductor, and also includes super-star and fellow Argentinian pianist Martha Argerich, his son and violinist Michael Barenboim, cellist Kian Soltani, and the Staatskapelle Berlin.