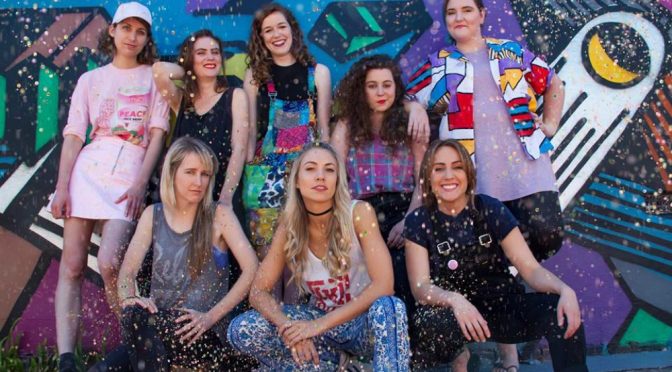 From first bang, when the troupe popped out from behind the Mini Theatre’s blue velvet curtains, it was clear that the audience was in for a high-energy and spirited performance.

With true class, improvised introductions answered ‘who are you?’, relaxing the crowd into the intimate Bondi Pavilion theatre space whilst giving insight into the unique style and quirks of each performer.

The chemistry of CONFETTI GUN literally explodes on stage with quick wit and seamless popular culture references fired from all angles. Having rehearsed together for almost a year now, the troupe’s undying trust and boldness is evident when even an unplanned backward stage stack is hilariously transformed into a ‘get out of the hole in the kitchen, Brian!’.

Consisting of eight mates who all love the funnies, Confetti Gun have trained with Improv Theatre Sydney, Impro Australia, UCB, iO and Second City and have just returned from NYC having performed in the world’s largest improv festival, the Del Close Marathon. Therefore, it is no surprise to see the dynamic Australian troupe featured in this years Bondi Feast line-up; a fringe-style winter festival which presents the best in home-grown theatre, music, comedy and visual arts.

Unplanned is the name of the game in improvisation and the show exuberantly swooped up audience word suggestion ‘binoculars’ exploring a narrative from bird watching with ‘Captain’s mate’ through to news reports on a concerning methamphetamine-addicted bird epidemic. Playing on the renown ‘Bunnings sausage sambo’, a scene of forgotten stray kids living in the Bunnings carpark are invited back to a new rich friends house for some macaroni (with mum’s special ingredient, cumin).

It’s incredibly refreshing to see an improv show that excels through inventive, clever and truly funny humour instead of the all too common improvisor’s launch into sexist, vulgar and offensive stereotypes.

For more information on CONFETTI GUN and their upcoming shows, go to: