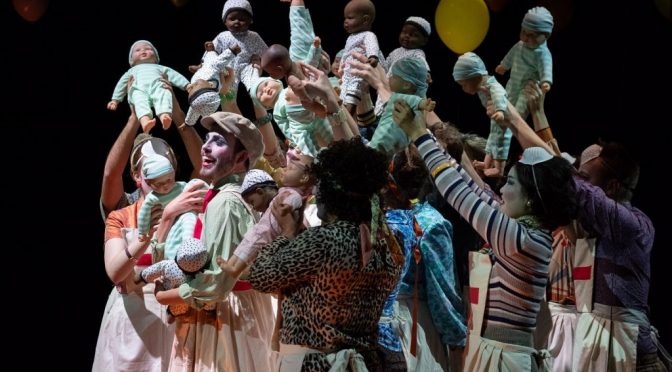 Here is a significant event from Con Opera, enabling us to enjoy a rarely heard opera by Poulenc. This colourful romp  celebrates the play by Guillaume Apollinaire and Francis Poulenc’s skill as a composer of vocal music for the stage. The production values are high, resulting in a joyous and visually excellent entertainment.

Les Mamelles de Téresias, set in the fictitious French Riviera location of Zanzibar, was premiered in 1947 with the atrocities of WWII still fresh in the minds of many.

Its themes of change, defiance, ambition, gender equality, challenging the status quo, or rebuilding society with real and symbolic babies were poignant for its time. The approach to such material in this production also makes it keenly relevant to assorted  tensions and urgencies of our modern times.

The character of Therese repels her female-ness and the duties associated with it, becoming the masculine-appearing Téresias .Her breasts are released to the sky as balloons and her cross-dressing hungry husband is not fed nor given children as the role reversals incroyables for the couple hurtle along, taking us with them.

The fluidity as well as finesse of Poulenc’s text setting and emphatic repetitions of catch-cries from the stage were ably matched in this slick production.  Clear, precise delivery with keen  comic timing is always deftly wrought from every performer on the stage.

Ensemble scenes are tight and varied in appearance, movement, expression and tone. Director Kate Gaul succeeds in drawing together the many  threads of this opera to maintain  momentum and clear lines across the space.

Tableaux of large ensembles or full cast are consistently imbued with infectious energy in their impact yet also glow with subtle shades of satirical comment.

It was pleasing to see all exaggerations in the storyline  and the larger than life predicaments  handled dramatically and musically with an impressively mature absurdist swagger by this student cast.

Costuming and use of props across the stage are gloriously bright and dazzlingly diverse. This is lush bait with which to lure a twenty-first century audience accustomed to a daily diet of visual stimuli from electronic devices or social media sources ready to shock.

The bar is set high from the outset with regards to vocal stamina and agile facial exprssion with Haotian Qi as the Director  addressing us in clear communicative baritone with focussed gesture.

Standouts in shades of comedy and command of the stage physically as well as vocally are Gavin Brown as Therese’s husband  (Le Mari) and  Jeremy Dubé as the gendarme.

The later extension of the balloon motif from Therese’s defiantly discarded breasts creates a beautifully hued  child-like fantasy environment with balloons for the birthing scene and ensuing moments of impossibility.

The use of the stage as a space for such evocative props and by individual performers drawing fine caricatures makes for slick  and snappy delivery of this absurdist satire. Fausto Brusamolino’s lighting, particularly floor patterning and  ubiquitous ghost-like torch effects makes use of a stunning palette over which the commentary can unfold.

In the role of Therese/Teresias, Esther Song displays commanding stage presence. Her dramatic flair is matched by other principal or featured cast members, The various faces in crowd scenes also supply rich diversity across the stage and take cheeky, chameleon-like candid glimpses at society through acting of a high standard.

The nature of this story and racy twentieth century theatrical style demands a rollicking yet delicate approach to the elasticity of reality. Through fine direction and design, the performers achieve this. They are given effective resources with which to shape their stage performances and hone their studies of the operatic craft.

This cast releases considerable energy by sharing with us Poulenc’s quirky vision as well as often underestimated unique approach to music and art. Music Director Dr Stephen Mould ensures the orchestra and vocalists give us a luminous and adequately light rendering of the not-so-light score with it’s deceptively simple accent.

Sydney Conservatorium Opera School performs Les Mamelles de Tiresias on Tuesday May 22 (6.30pm), Thursday May 24 (11.30pm) and Saturday May 26 (2.00pm). This is a special opportunity to view the uniqueness of Poulenc’s first opera, given here an expressive, impressive and aesthetically pleasing airing.