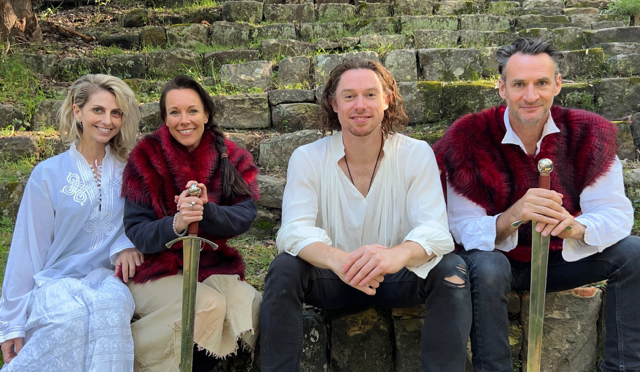 Who are Come you Spirits?

COME YOU SPIRITS is a collective of actors based in Sydney’s Lower  North Shore and touring NSW giving a fresh voice to the greatest  stories of our time.

We’ve taken a unique approach to performance – uniting  ancient tradition and the basic human energies of the  heart, the masculine and feminine, drive, truth, vision,  our connection to the land and the pursuit of something  greater.

The soundscape takes the audience on a journey. The actors are  amplified to allow for full vocal range in performance and the  speakers in the space are supported by large, wooden, constructed  flat reflector sheets that look like monoliths from Stonehenge.  These are positioned at specific points that hold the principles of  sacred geometry and temple building. In ancient temples, like the  ones that are 10,000 years old, they used giant stones to reflect  and resonate sound in the space – we’re using sound in such a way  so the whole body hears it.

The performances will release serotonin in everyone’s brain, your joy hormone, kicking out the sleep hormone melatonin. When this happens during a show like Romeo & Juliet being performed for you in nature,  you buzz with vitality.

For the evening shows, we have our own lighting, candlelight, flambeaux and hopefully a fire pit as  well. Celebrating the natural landscape, most of the acting takes place across the space, the actors  being on various levels moving amongst the audience, including the accessibility area on the road,  which is actually part of the designated performance space.

By having only four actors playing four characters who tell the whole story of both plays, it means that  the narrative is simplified. Audiences who have seen our shows say they felt equally invested with all  four characters, not just the protagonists.

How will the plays work at The Haven Amphitheatre? The Haven is magical and enchanting. Romeo & Juliet will be  performed during daylight and Macbeth in the evening. Tuesday  21st June marks the solstice and that first performance will be held at sunrise. The intense burst of dawn sunlight activates the space,

Working with Chi energy, used in Tai Chi and Karate, we’ve found it creates a very dynamic and  charismatic performance style. In our workshops for students and adults we’re seeing the impact it  has across all industries in all forms of personal and professional communication. As well the  significance of employing Chi as part of normal daily life. We in the West think of it as being magic,  but for ancient cultures this has been Science since the dawn of time.

A little more about the cast

We’re four experienced professional actors who have worked internationally and across Australia, seasoned in Shakespeare and classical theatre, film and TV.

To book tickets go to: http://comeyouspirits.com

Tuesday 21st June at 6:30am – Romeo & Juliet (special dawn performance to mark the start of the  Winter Solstice) and at 6:30pm – Macbeth