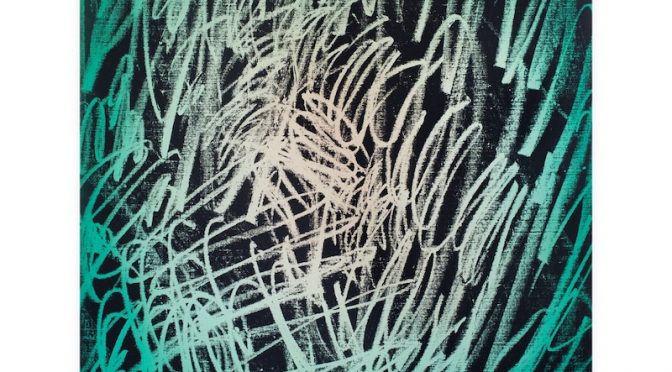 In SIGNAL we see two linked sets of themed works created in quite separate locations – electrotypes produced on the island of Gran Canaria in the Canary Islands during a residency enabled by an Ian Potter Cultural Trust grant, and paintings composed in Leipzig, Germany, during the last two years.

Dunbar won the Brett Whiteley Travelling Scholarship in 2019 and the current exhibition marks another outpouring of work.

The exhibition pervades with a sense of timelessness, of rediscovering ancient treasure. Both series are linked by the use of copper. The Malachite Paintings are in some ways like swirling underwater coral, and capture the feel of intertidal rock pools, and both series have the sense of dramatic energy. They are in various tones of aqua, pale and dark blue and white and can be viewed as energetic, swirling rock pools, full of animation.

They roil, eddy and cascade as if rippling seaweed but could also pe be regarded as layers of exploding fireworks . Each one has a slightly different, very strong line of direction in the various layers of the composition, and at times there is a rather ominous dark shadow hovering in part of the painting – a diver perhaps?

The electrotypes (something made by the electrolytic deposition of copper on a mould) possibly have more of a feel of ancient lost tablets rediscovered. The works reveal the meticulous attention paid to detail and the relationship between the materials used.

The series has a sense of excavated, previously buried fragments with a sense of the transience of time and space. They are like fragile rock art, in earthy tones and emphatically textured.

Works 1-IV are in earthy tones .No1. looks like it is framed with shells. Nos. V-V111 are in pale blue, No V111 has a strong diagonal composition and also features sea shells. 1X to X11 are in more russet like tones.

Sometimes the particular work is partly fragmented and ‘torn’ as if old and fragile and damaged during disinterring.

A delicate, yet powerful exhibition.