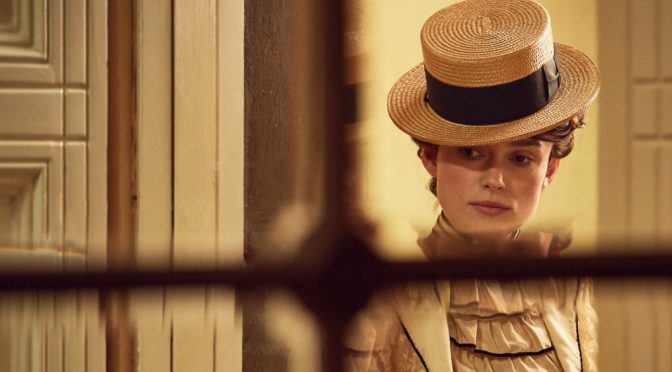 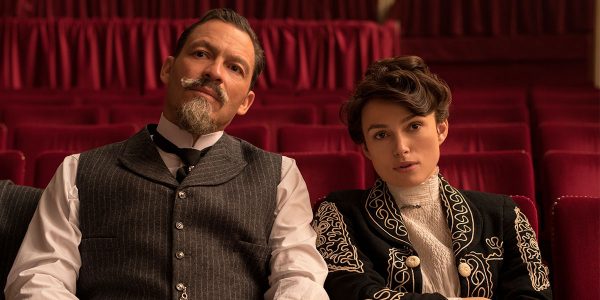 An opening shot of a pussy languidly licking itself on a sun drenched bed instantly sets up a bucolic atmosphere, a realm that is at odds with the sophisticated world the girl sharing the feline’s sheets will soon be plunged into.

After falling in love with and marrying a Parisian man of letters, widely known by the single name, “Willy”, Sidonie-Gabrielle Colette is transplanted from the tranquil environs of rural, 1890s France to the bustling streets and flourishing salons of turn of the century Paris.

Calling herself simply “Colette”, she adapts to her new life and is soon absorbed into the intellectual, literary and artistic world of her husband, although she struggles to accept his extra marital affairs. The hypercritical philanderer of course will will not countenance any such infidelity in her, except same sex dalliance, which, he assumes, he can share.

Willy runs an editorial workshop, or factory, where a gaggle of ghost-writers produce fiction under his nom-de-plume.
Eventually, Colette herself becomes one of Willy’s “ghosts”, penning a semi-autobiographical novel about a 15-year-old country girl named Claudine. On publication, it becomes not only a huge bestseller but an astonishing cultural sensation, and a burgeoning merchandising bonanza.

Willy and Colette become the Belle Époque equivalent of a celebrity couple; their personal lives and their sexually adventurous scandals all fuelling the subsequent novels. A marketing genius, Willy uses the brand of Claudine to sell ancillary merchandise – from sweets to soap – but his refusal to acknowledge his wife’s authorship puts a tremendous strain on their marriage.

Colette forms a relationship with the nonconforming aristocrat, the Marquise de Belbeuf or “Missy”, who pushes her to claim her own artistic voice. Colette literally runs away to the circus with Missy, becoming a performer in exotic vaudeville. Finally breaking free of Willy, he is eclipsed, and Colette is set on the path to becoming one of France’s, and consequently the world’s, most famous and beloved literary figures.

COLETTE is a grand theatrical and very handsome film with a big, bravura performance from Dominic West as Willy, with rounded vowels with a timbre rising from his bowels, the perfect cad, proud, loud, loveable egotist.

Keira Knightly in the title role is ravishing with the incandescent zest of Colette’s character.

Directed by Wash Westmoreland, co written by Rebecca Lenkiewicz, who co wrote Ida and Disobedience, COLETTE is a terrific companion piece to the recent brilliant and bracing Glenn Close starrer, THE WIFE.