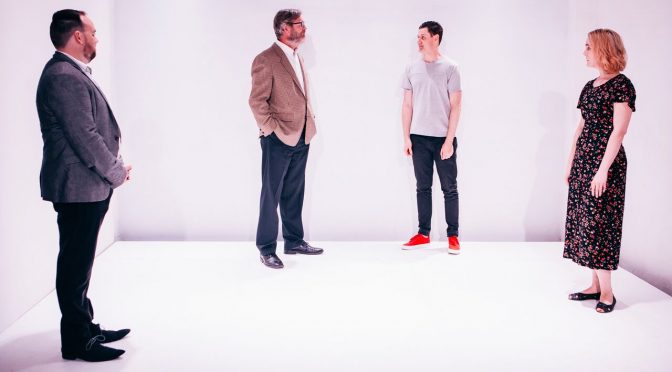 I couldn’t make up my mind which of the figs I would choose. I wanted each and every one of them, but choosing one meant losing all the rest…” Sylvia Plath, The Bell Jar

From time to time major decisions have to be made, ones that will irrevocably change the rest of our life.  Sometimes for some lucky appealing people it can be between different potential partners and that is a perennial winning formula for dramatic tension. Who is going to be the chosen one and who is going to lose the object of love? Or lust.

COCK, written by Mick Bartlett dives into that formula with a contemporary nod to the LGBTI community of attempting to pigeonhole people according to their sexuality.

John, the only character in the play with a proper name, breaks up with his live in stockbroker male partner, M, meets female divorced teacher’s assistant, W, has fabulous heterosexual sex for the first time then decides that he wants M back but is still besotted by W and all she has to offer.

Deciding to break up with M in the first place is about the only decision John seems capable of making. His inability to settle on either M or W and his vacillation between the two is the activity for the rest of the play.

However, it is much more than lack of conviction and sexuality issues. This is a power struggle that showcases the intricacies and dynamics of relationships with M and W both jostling for control of John. M has deep knowledge from years of cohabitation and his particular brand of control is the loving put down, the ‘brotherly’ criticism and bossy bullying that keeps John feeling like a child. W brings a new sexuality and feminine praise, plus a promise of children and a future full of plans, making him feel adult at last.

The classic plot device of the dinner party is then brought in.  A resolution is to be worked out between the three of them over a beef dinner that M is cooking like a martyr. But weirdly, M invites his father, F to the dinner and F proceeds to wade confidently and paternally into the mix, making statements of love for M and John and their relationship and telling W to leave them alone as if she were some school yard bully harassing his son. Dammit, now that he has come to embrace his son’s partnership with another male, he’s not about to reverse that!

W is his match though and bats him right back into his corner and this is when we see the real power battles for John occur as W and M go toe to toe with John waving backwards and forwards between the two. He’s really frustrating and one would be inclined to say he’s not worth the effort really until you realise that he is what M and W both need – someone they can control. John just can’t decide what future or which type of domination he wants or needs most.  Or whether he needs any of it at all.

Stooged Theatre has a commitment to contemporary work and Director Mathew Lee and Assistant Director Charlotte De Witt have chosen a perfect venue in the Royal Exchange in Bolton Street for the staging of COCK. Its intimacy puts us all right into the action that unfolds in a completely bare small white room. Clothes are removed and food and wine is served in word only. The entire focus is on the characters and their razor sharp dialogue as they circle around one another in their verbal sword play of power and control. We watch sex take place as dialogue only, a circling vocal immersion.

Drew Holmes as M prowls the space and easily assumes manipulative command. The flickering whirl of M’s emotions and thought processes are masterfully delivered, vocally and physically. His physicality is in contrast to long and lanky Benjamin Louttit’s indecisive John, creating another dynamic that is then further supported by an expressive and confident Elise Bialek as W who has no trouble holding her own in the battle for the sex.

Alan Glover strides in as the initially confident F, ready to take down this interloper in the most fatherly of manners but when his swaggering grandeur is quickly smacked down he appears to shrink and fade. It’s a clever trick.

This is a nicely paced production, with the short scenes connected by a repeating piece of music, designed by director Mathew Lee. The lack of any stage set or props ensures an efficient and snappy transition and this is supported by an experienced ensemble who all masterfully handle the demands of an essentially dialogue driven work. There’s never a dull moment and the 110 minutes no interval passed very quickly.

It’s worth having a look.

Times and dates for COCK at the Royal Exchange 24 Bolton Street, Newcastle NSW 2300