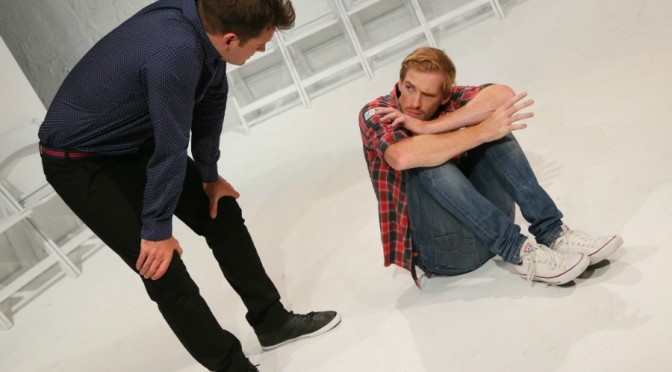 Torn between two lovers, cock shocked and cunt struck, John is at odds with his old boyfriend and new girlfriend and with himself in Redline’s robust, ribald and bollocking production of COCK by Mike Bartlett.

Played in the round on an unadorned white walled and floored set, the play wheels, weaves and winds through the windmill of John’s indecisive mind as he tries to weigh up which way he will go – back to his male lover with all its history or forward with his newfound fondness for vaginal sex and a future view of breeding fecundity.

His homosexual partner has somewhat infantilised John, speaking in familial terms, alluding to fraternity in their relationship, although the dynamic of the relationship leans more to the paternal, with the boyfriend patently patronising.

As for the female he has fallen for, maternal instincts aside, she at least encourages his search of self, in tantamount hope she’ll become a close bosom friend of a maturing son.

Michael Whalley is splendid as John, exuding a spring-loaded coiled confusion of the man child who has his cock and wants to eat it too. His expression of the vituperative script makes the vacillating compulsively thrilling, making it less obscure as to why both the others see him as an object of desire.

Matt Minto is terrific as John’s cuckolded partner, offended and affronted by John’s infidelity, flabbergasted that it’s an affair with a female, yet wanting to forgive, perhaps forget and keep their relationship going.

As the pussy among the penises, Matilda Ridgway gives a blistering account of a woman whose emotions will not be played with – she’s a cuntburger with fries, and fairly sizzles when riled.

Late addition to the cast due to late onset illness, Brian Meegan acquits himself with sterling script in hand work as John’s jilted boyfriend’s father. Lines may not be nailed yet, but the characterisation is crystalline.

COCK can be seen as a battle of the sexes – homo and hetero – comedy. A comedy of errors, a comedy of manners, re-examining stereotypes and labels, identity and gender politics.

The jesting and jousting is hard and fast, leading to a shattering climax. COCK is cocksure, be sure to see it.

COCK at The Old Fitz plays Tuesday to Saturday at 7.30pmj, Sundays at 5pm till March 6