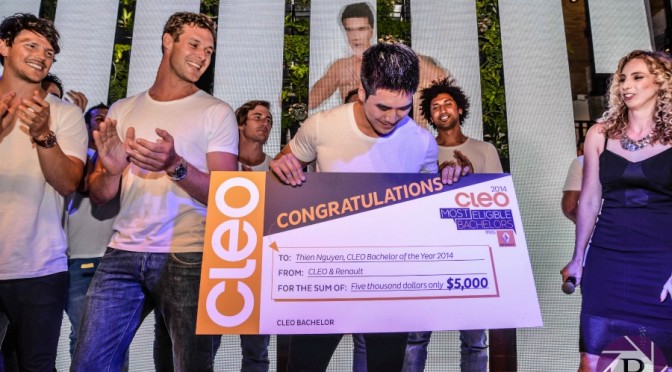 The 27th Annual CLEO Bachelor of the Year Award event was held last Wednesday at St Kilda’s ST Hotel in Melbourne. Hosted by Channel V’s Carrissa Walford and Danny Clayton and attended by celebrities including season 6 Masterchef winner Brent Ownes and ironically, runners up from The Bachelor TV show. There were more than 500 entries from men from across Australia who made it to the Top 30 with only one being crowned ‘Australian Bachelor of the Year’ and winning $5,000.

There was a lot of variety amongst this year’s Top 30 finalists, including plumbers, marketing directors and even a marine biologist. Sydneysider, 28 year old Thien Nguyen, beat those 29 other finalists to win the title decided by around 300,000 readers. The personal trainer and aspiring actor told The Sydney Arts Guide that the win was an unexpected surprise.

“I’m still in shock. I didn’t see it coming,” said Mr Nguyen, “I feel like I’m part of a dream.” The CLEO Bachelor winner was very appreciative of the support he had received from his family and friends throughout the journey. Thien Nguyen had some pretty stiff competition, going up against AFL player Tom Derickx, Home and Away star, Nic Westaway and Triple J Hottest 100 winner, Vance Joy.

“He’s a lovely everyday guy,” CLEO Editor-in-chief, Lucy Cousins says; “And this year, we decided to refresh Bachelor of the Year by including both a ‘real-guy’ and a nomination factor. And to our surprise and delight the winner, Thien Nguyen, was one of the nominated ‘real guys.”

Below are the Top 30 finalists for CLEO Most Eligible Bachelors, 2014

Nic Westaway, 25, Home and Away actor

Dom Nadar, 31, DJ, part-time model and one half of the Bondi Hipsters

Adrian Archer, 29, DJ, organic juice maker, creative director of ‘…….’ and the other half of the Bondi Hipsters

Jack May, 27, barista and store manager