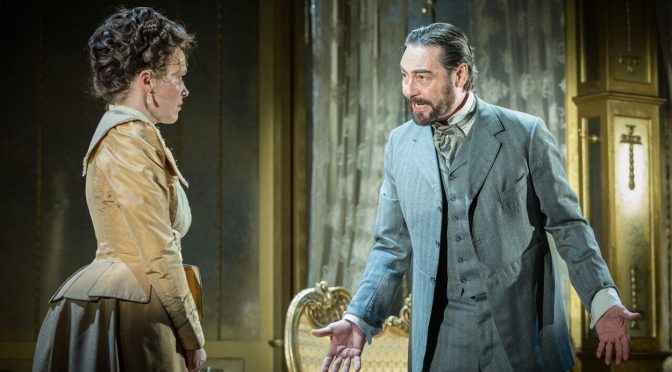 Oscar Wilde’s play AN IDEAL HUSBAND premiered in 1895 .This new production, part of the Wilde season by Classic Spring Company was filmed earlier this year at the Vaudeville Theatre in London’s West End.  It transfers excellently from stage to screen.

Directed by Jonathan Church mostly it seems as relevant as if it was written yesterday, with its scheming, plotting and hidden potential scandals of political financial meddling and corruption. It is tautly structured with several complicated plot twists. Other issues Wilde raises include women’s position in society, class divisions and the forgiveness of past errors, and the damage of ruining lives of great value to society because of people’s hypocritical reactions to those acts .Church has a fabulous creative team and a magnificent cast. Great attention is paid to Wilde’s witty aphorisms and sparkling text and there is excellent timing and phrasing from the superb ensemble

It is gloriously designed by Simon Higlett .The sets are ravishing and elegantly subtle especially for those of Sir Robert Chiltern’s house with the burnished gold .The costumes are stunning – exquisitely tailored expensively cut suits for the men and some striking outfitsfor the women.

Bearded , distinguished Nathaniel Parker wonderfully plays Sir Robert Chiltern who is not only the uxorious IDEAL HUSBAND but also an very promising government minister with every possibility of eventual selection for the Cabinet.

Our main heroine is Lady Chiltern beautifully, delicately played by Sally Bretton .Lady Chiltern is a classic example of decency and honesty and love ( virtually hero worship ) of her husband. Sir Robert appeals to his high-minded wife not to put men on a pedestal. “Why can’t you women love us, faults and all?” However he is too obviously guilty for that line not to get an ironic laugh – and it’s his friend Lord Goring who argues the case for forgiveness : “Nobody is incapable of doing a foolish thing. Nobody is incapable of doing a wrong thing.”

As Mrs Cheevley , Frances Barber has great fun being the scheming, double crossing , blackmailing villainess. In Act2 she is regally dressed in a stunning black and white gown ( Aubrey Beardsley inspired? ) and is like a wicked queen stepmother. Possessing a very compromising letter, she seeks to destroy the career, reputation and marriage of Sir Robert Chiltern (Nathaniel Parker) – unless he gives his support to a fraudulent Argentine canal scheme.

Our young romantic lead, blonde terribly handsome Freddie Fox as Lord Goring ( and yes he has played Lord Alfred Douglas already) gives a tremendous performance. With wonderful comic timing he has great fun being superficial and witty and generally bubbly and vibrant on the outside but we also see his serious side – a hidden volcanic and troubled interior and how he loyally tries to save his friend Sir Robert Chiltern from ruin and disgrace. Goring makes a magnificent plea for a life that acknowledges the importance of love and forgiveness instead of cold carping pitilessness.

Mabel Chiltern whom Lord Goring is in love was vivaciously played by Faith Omole .She views Viscount Goring as an ideal husband and delightfully verbally spars with him word for witty word throughout the evening .

Amongst the supporting cast Susan Hampshire  has great fun as Lady Markby, blathering about class distinctions and modern manias in an uproarious Lady Bracknell like bravura performance .

The play is full of moral complexity and wonderful lines, delivered with freshness and ends on a happily romantic note. It is sobering however to remember that just six months after it premiered Wilde’s tragic downfall began.

Classic Spring Company’s AN IDEAL HUSBAND plays at selected cinemas from the 13 October 2018.