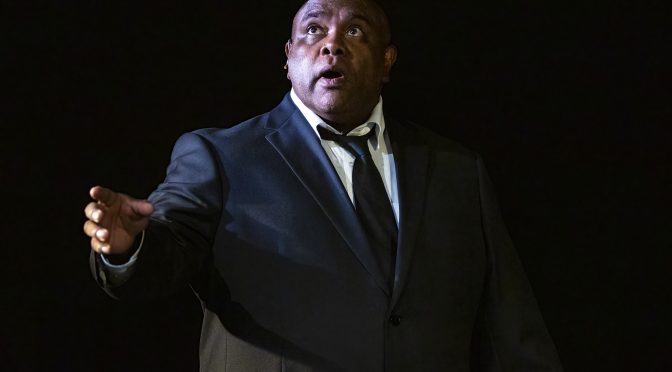 Breythe is a young indigenous actor who has been working on the East Coast in the entertainment industry for a while and is being increasingly dismayed by the cliched and disrespectful treatment that he, a  proud Woongutha-Yamatji man, is receiving.

His life dramatically changes when one day he receives a call from back home in Kalgoorlie that his father has tragically died, He returns home to a mourning, deeply troubled family who are cynically about his successful city slickers career.

Structurally the play works well as a powerful drama. I felt a bit iffy about Meyne’s decision to go outside the narrative to include a vehement monologue,  straight after interval, against the dominant white culture after interval. The audience loved it. I guess my tastes are a bit traditional.

The performances are all big and passionate and really drive home the power of Wyatt’s play. My pick of the performances; Matthew Copper as Breythe’s malcontent, at times aggressive brother, Mateo, Simone Detoiurbet is heartfelt and excellent as Breythe’s sister who is often found trying to keep the peace. There are some flashback scenes in the play that feature Breythe’s father and Trevor Ryan gives a fine portrayal. Ian Michael impressed as family friend Cliffhanger who always seems to be getting himself in trouble.

Shari Sebbens direction is taut and accomplished. The main action of the play takes place around the family home with a lovely design by  Tyler Hill.  Verity Hampson’s lights the stage with her usual high standard. Michael Carmody’s videos work well to add to the play’s depth. Rachael Dease’s  soundscape is understated and very effective.

Running time : 2hrs and 10mins including one interval.