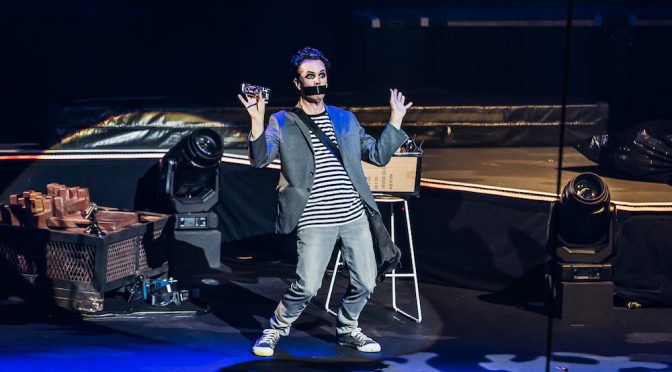 This was a memorable circus.show in any way you choose to look at it.

The conceit /premise for the show is  that it is running parallel to the 50th anniversary year fo the moon landing and the show is interspersed  with  Presidential. as we ell as  other recordings  made from the time.  The show comes close to its finale  with Armstrong taking the first steps on the moon.

This circus was an intoxicating recipe of  pulsating  music, exquisite physical agility and then some clowning around with plenty of audience participation.

There were many highlights. Here are just some of them. Submergence’s Nicholas-Yang Wang and Shengpeng Nie’s showcased some exceptional hoop diving  as they dived, jumped, twisted  and somersaulted their  way through and over hoops which  were increasingly  tacked on top of another as the degree of difficulty increased so did their focus.

The Cosmonaut (Oleg Spicin) was exceedingly good. as he balanced on his head whilst swinging on a trapeze.

There was even a  bit of dance/ballet in this circus with Felice Aguilar (The Celestial Cyclone) n her act called ‘Spinning  Girl’ . Dressed in silky clothes she danced in exquisite patterns making for an entrancing performance.

Roy Miller and Luis Romero- The Flyers Valencia-  wheel of death act was very impressive, as they balanced inside and outside the two wheels as they turned at an increasingly rapid pace. Very difficult, and impressively carried out.

Anna Lewandowska’s, ‘The Orbiter‘, whose spherical wheel drew a lot of attention with its mesmerising wheel rotations..

The Rockateers  were exciting  to watch as Denios Kibenko, and Dimitri Stepanov revelled in their use of the teeterboard (akin  to a playground see saw) to propel themselves skywards in an exciting fashion, and then to balance well upon landing.

Host Tape Face aka Steve Capps and clown  Salvador Salangsang kept everyone entertained with their revelry, bringing people onto the stage and getting them to  join in their playfulness  before we were indulged again with yet another great circus act.

Exciting, surprising, jaw dropping and at times lyrical this show will linger in my memory for a long time,

Recommended CIRQUE STRATOSPHERE is playing the Concert Hall at the Sydney Opera House between the 24th and 29th December and the 14th and 19th January, 2020.