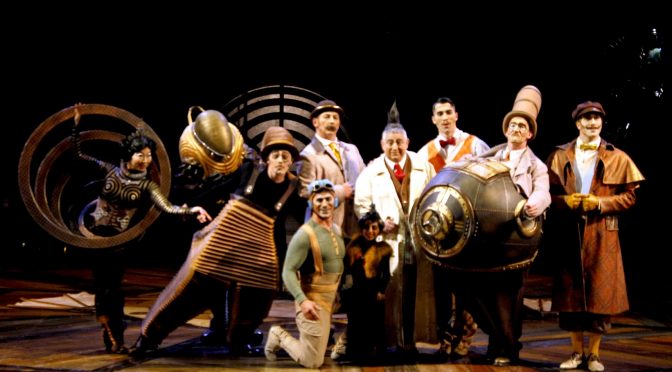 All the Cirque Du Soleil’s have striking individual themes. KURIOS-CABINET OF CURIOSITIES  is particularly unusual compared to other Cirque shows which have visited Australia.

In the first place , there is a mini show which is an adjunct to the main show. Weather permitting visitors will be greeted by a trio of performers who have climbed on top of the Big Top while playing music and acting.

Furthermore, this circus is set at the turn of the 20th Century complete with vintage costumes and imagery inspired by Jules Verne’s illustrations and Georges Melies’ films, with everything being conceived and directed by  Michel Laprise.

KURIOS is  a fantasy in which time comes to a halt, transporting the audience inside an other worldly realm where everything is possible. It is a place where the craziest ideas and the grandest dreams await through which we are guided by a scientist called The Seeker. He has a  curio Cabinet from which a fantasy world emerges, peopled by the cast who are made up of gymnasts, acrobats, contortionists, puppeteers, yo yo masters, clowns, and musicians  who play a form of music called Steampunk which is comprised of energetic gypsy jazz and electro swing.

Reviews garnered in the US include the San Francisco Chronicle which stated that “Kurios is the most enthralling, consistently over-the-top magical show Cirque Du Soleil has sent our way.” The Los Angeles Times enthused “Astonishing. Kurios inspires wonder, awe, excitement and suspense”. The Chicago Tribune recommended that “it is not to be missed on any account.”

About 30 specialists have flown out from Montreal , Cirque du Soleil’s headquarters, to give Kurios that extra special sheen.

Given the size and complexity of this ambitious project some unusual facts emerge :

The season runs from the 2nd October to the 24th November at the Entertainment Quarter. Performances run from  Tuesdays to Sundays  at 8pm with a matinee on Saturdays at 4.30pm and Sunday matinees at 5pm.

All pics by Ben Apfelbaum (c)