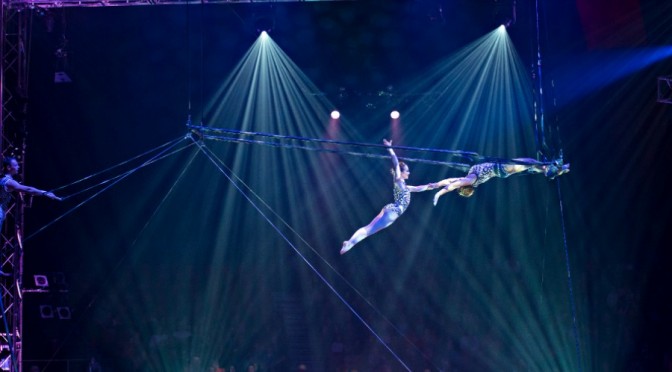 BUT WAIT…THERE’S MORE by Circus Oz is much more than clowns, acrobats, trapeze artists and jugglers. These performers are the building blocks in this highly entertaining show, quite literally, as they climb up, over and under each other. However, it is the stories and themes that are woven through the performance that lifts BUT WAIT…THERE’S MORE into a very satisfying level of entertainment.

The live music is provided under Ania Reynold’s excellent and entertaining musical direction and she is ably supported by Ben Hendry on drums and several of the multi-talented circus performers.

The vivacious ring-mistress Candy Bowers explains what is being presented is a hip-hop show with a bit of circus thrown in, which is something of an under-estimation. Whilst there is hip-hop there is also jazz, disco, heavy metal and plenty of fun and toe-tapping music. The high quality music adds a very entertaining dynamic to the show.

The Ringmistress tries to run a mostly traditional, old fashioned type of circus, introducing various acts, and building up the anticipation and excitement in the crowd though she is somewhat subverted by live advertisements urging us to buy more stuff, unspecified stuff, but nevertheless stuff.

These advertisements appear between some wonderful work with hoops by Lilikoi Kaos, trapeze artists Spenser Inwood, Matt Wilson and Derek Llewellyn, and Olivia Porter as the charming fool who goes on to display mesmerising brilliance.

The audience is also treated to auditions by the performers, mocking television shows such as The Voice, The X-Factor and Australia’s Got Talent, and giving the circus a chance to display the many talents on show including jugglers, trick cyclists, uni-cyclists and clowns.

Through the show there is very clever satire and social comment on contemporary life and the excesses thereof; information overload, speed, consumerism, visual pollution, television, the internet and today’s manically fast-paced lifestyle.

Set design and lighting are excellent and add to the night’s all round glamour and excitement.