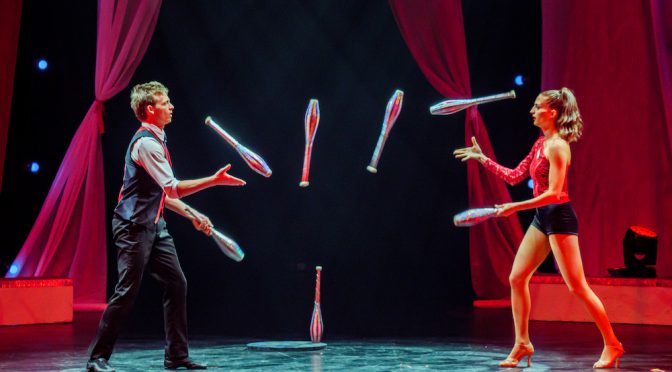 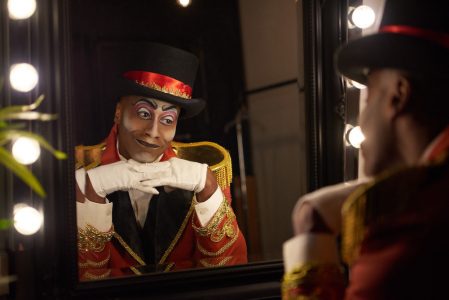 CIRCUS OF ILLUSION played two shows only, both on April 21 at the State Theatre. Excited children, smiling grandparents and keen amateur magicians of all ages packed the theatre. Magicians and illusionists have been around for thousands of years. You know what to expect – people will disappear out of locked boxes, handkerchiefs will change colour, lovely ladies will levitate, and there will be a bit of juggling, joking and jumping about. We know what to expect yet it is all terribly fun.

CIRCUS OF ILLUSION has loud music, bright lights, skimpily dressed dancing ladies, a strong man and acrobats. One skit follows another in quick order, keeping you on your toes while the performers are on their toes, their hands, their heads and on each others’ shoulders, heads, bottoms and backs. Tro Griffiths is the heavily-tattooed strong man. He doesn’t actually lift anything up, except himself! He climbs ropes, rods and hoops with amazing agility and, of course, with strength. He’s the strongman! Tara Boom thrilled us twirling and manoeuvring dozens of the hula hoops around herself. Ringmaster Idris Stanbury engaged the audience, juggled a bit, and told jokes the children could understand.

And the illusionist? That’s Michael Boyd. He is also the director and producer. He began CIRCUS OF ILLUSION four years ago and says, “It originated in a circus tent in Adelaide.  You can do a lot more effects and lighting and theatrics with the show  in a space such as the State Theatre.” Michael is a chatty follow who engages well with children. He tells us about his grandfather, a magician who taught him his first tricks. He brings a couple of young children to the stage (probably staged beforehand) to help with simple tricks. Michael has been performing for decades and knows what people like.

This isn’t great theatre. This isn’t even great illusion art. But, hey, it’s hugely fun, entertaining and an absolute delight to watch the kids’ excitement. Let them forget the pandemic and the homework for an afternoon. Give us more of this kind of pure entertainment. And anyway, who doesn’t want to levitate?