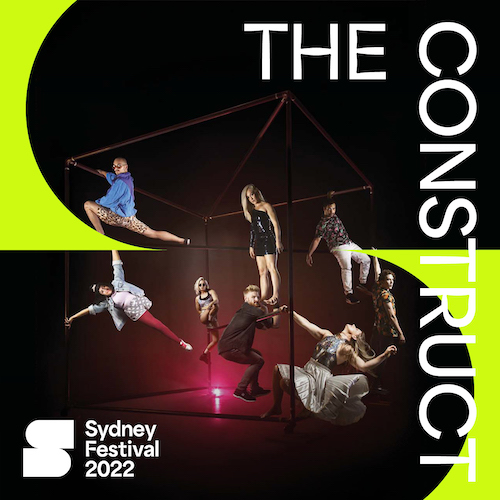 Choreographed by Zebastion Hunter and the Circus Monoxide aXis ensemble, The Construct is circus and contemporary dance combined. Elite artists will tumble, dance and contort their way through a unique steel sculpture, creating moments that are poignant, intense, playful and comic, set to a dynamic, urban, classical music score by Wollongong based composer Dr. Judith Stubbs.

“Created for public spaces as a direct response to the COVID -19 lockdowns, The Construct is a celebration of the freedom and hope we have found in our new normal,” says Zebastian Hunter, Artistic Director. “Audiences need to see art that reflects who they are and how they relate to each other during COVID – 19. Working in an abstract palette you can touch people on a personal and profound level.”

“The Construct is philosophically about the challenges we’ve all experienced and are facing during COVID” said Linda Catalano of Quiet Riot, national and international  programmer, curator, agent and manager who works in live performance, film and television. “We’ve overcome so many obstacles to create The Construct together.”

Artistic Director Zebastian Hunter is a critically acclaimed director with a rigorous process and twenty years’ experience in circus. He started his career at the Fruit Fly Circus and trained at the National School of Montreal, at UNISA and NIDA. From 2009 to 2015 the elite circus artist  (aerialist) performed all over the world as feature soloist in Cirque Du Soleil’s Alegria and Quidam. He came to Circus Monoxide from his most recent role, Head of Performance at NICA, Australia’s National Institute of Circus Arts.

About Circus Monoxide  Since 1996, Circus Monoxide has been producing professional touring productions and a wide variety of community, training, and education projects for people of all ages from their base Wollongong.

A beloved feature of the Illawarra arts community, Circus Monoxide’s circus school is a bustling hub boasting 1,920 classes and over 450 students per year, holiday programs, school incursions and more. An inclusive and ever-evolving centre for high flying, stilt walking, spinning, tumbling, fun-loving entertainers of all ages, classes are offered 6 days per week, led by world-renowned trainers. Students are offered performance opportunities during each term.

Artistic Director Zebastian Hunter, former Cirque Du Soleil artist, is a critically acclaimed director with a rigorous process and twenty years’ experience in circus. He started his career at the Flying Fruit Fly Circus and trained at the National School of Montreal, at UNISA and NIDA. He came to Circus Monoxide from his most recent role, Head of Performance at NICA, Australia’s National Institute of Circus Arts.

Composer – Dr Judith Stubbs has composed music for circus, theatre and physical theatre projects. Judith has completed commissioned orchestral and choral works in Australia and internationally. and has written and performed on soundtracks for diverse Australian film projects. Her music has featured in diverse theatre productions.

Performer – Johnny Brown NSW Johnathon is a proud Anawan/Kamilaroi Man from Armidale, NSW in the New England region, currently a dancer/acrobat performer at Casus circus in Brisbane, QLD.  Since 2017 he has been touring around the world and performing in festivals..

Performer – Melissa Kisela  Wollongong  Melissa has been a member of Circus Monoxide for fourteen years as both a trainer and student. As a performer she has appeared at the Mullumbimby circus festival, the national flying trapeze school in Melbourne. Melissa has also appeared in Channel 7’s show ‘Ultimate Tag’ were she versed prestigious athletes and was able to make it to the semi finals.

Performer – Roya the Destroya  VIC Roya is a strong believer that every day is an adventure. She is a passionate street performing artist who plays with her abilities to shock and disrupt the stranger into a soulful and joyful exchange. Roya has performed in events and festivals around the world from busking in the Middle East and performing at the White House.

Performer – Blake Wilson NSW Blake is a professional aerialist and hula hooper with a dance background specialising in aerial silk, corde lisse, lyra and hammock. He has trained with industry leaders  such as Cirque du Soleil and and Fruit Fly coaches. He has performed featured acts nationally at festivals, gala and corporate events and as roving entertainment.

Performer – Emma Goh NSW started her career in Ballet, with contracts for companies including The NSW Ballet Company and The Queensland Ballet. A desire to travel took her to Europe, Asia and the Americas where she worked as a freelance dancer. This gave her the opportunity to work with many amazing artists, and explore new genres of performance such as Adagio and Aerial work, focusing on Lyra, Silks, Trapeze and Spanish Web.

Performer – Campbell Clarke NSW started Circus Arts training in 2014 at The Flying Fruit Fly Circus and graduated in 2021. In 2015, Campbell was selected for the award-winning show Junk performing in a number of acts including Teeterboard, Tramp Wall, Chinese Pole, Tumbling and playing an original musical score on piano. In 2020, Campbell was cast in The Flying Fruit Fly Circus show Time Flies, performing a season at the Sydney Festival.

by Axis, part of Circus Monoxide