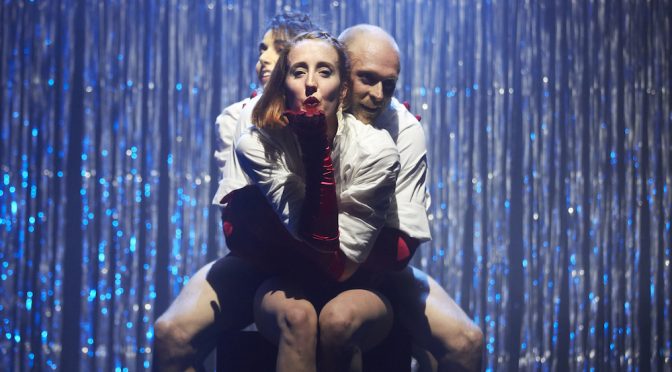 ‘This is my second time to see Peepshow’, the woman sitting next to me said. ‘I see everything Circa does!’ It was opening night in Sydney. How had she already seen Peepshow? ‘I came down from Brissie especially to see it again,’ she beamed.

Then the lights beamed and the show began. It is just as the publicity material spruiked: “Peepshow turns cabaret on its head, literally. Peepshow lurches from the thrillingly acrobatic to the comically playful…teetering towers of balanced bodies, extreme bending, beguiling burlesque, and devilishly precarious aerials.”

The critics agree. Peepshow received rave reviews in England, Brisbane, and now Sydney. The acrobatics are morphed with contemporary dance, comic routines, mirror-image mimicry all synched to a varied soundtrack. The music melds from classical to cabaret to Louie Armstrong and others without much rhyme or reason but somehow it works.

And the extent of the peeps in the Peepshow? At times it is saucy and sexy. There is one set where the eight performers are almost nude. This is the funniest part of the show. It’s difficult to feel like you are in a cabaret or night club in the Theatre Royal, but the mood is there. It was good to be back in the refurbished Royal after the five-year hiatus.

There was super high-energy acrobatics involving all eight performers, interspersed with reflective solo performance moments. It was the rush-then-hush that kept the audience engaged, thrilled and stunned. How can he twist like that? How can she leap that far?

The only quibble is that the lighting in the second half was so atmospheric that it was difficult to see the performers. Given that this half wasn’t a cabaret setting, there seemed to be no reason to keep us in the dark!

Circa is an internationally acclaimed performance group. All involved are to be congratulated: