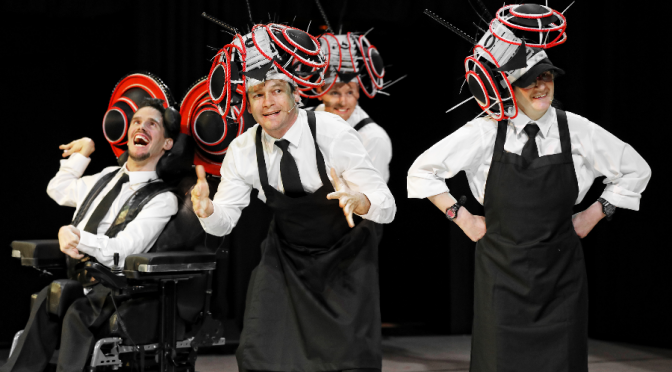 Type in ‘inspirational’.  Right click.  Pull down synonyms.  Stimulating Stirring Rousing Moving.  Well … that’s bullshit.  These artists exhibit no desire for that kind of spurious platitudinous response.  These are performers whose work has an urgency to be respected for their message, the artistry of their thematic expression and the craft with which it is created.

I have been to see CHRYSALIS.

It is blood, after all, that humanity has in common.  It pulses through all of us indiscriminately, be that puncture or transfusion.  The overarching symbolic cohesion of this production is in the use of red wool to bind us all together. Written by Stephen Sewell, Emily Dash and Warwick Allsopp (Emily and Warwick also perform) and with sterling direction from Kylie Harris, CHRYSALIS combines vignettes, songs and storytelling in a medical setting with a beating heart of verite  theatre.

“A protest inspired by true events in the lives of ensemble members with signiﬁcant disabilities who feel they have been mistreated and ignored by doctors and institutions.”

Glenn (Glenn Turnbull) is not just the central figure whose wheelchair is upstage for the whole production.  Glenn is one of us.  He watches … not just his cast mates and their performance though.  His acuity as an observer is tuned further out than that. He watches us watching.   The program notes indicate that in the devising of CHRYSALIS, he was keen to explore how he is often ignored.  That is not the case here.   Glenn is an arresting presence and his words, spoken as voice over to close the show, make one want to know more of this young man.  An argument over a beer about his choice of footy team might be a good start.

Glenn’s impact is also due to the excellent performances of the cast around him.  Paul Mulgrew does a terrific job as the doctor.  Paul has power and expression in his voice as he has the doctor’s clinical indifference just right.  Yet he mitigates the dispassion with explaining about the doctor’s 14-hour shift.  Jude Bowler as the Paramedic has a much tougher gig, though, because she has the most obnoxious and repellent of the dialogue.  It’s teeth grinding stuff, made worse because it is based on the lived experience of some of this ensemble.  She’s really good at being shitty.    Warwick Allsopp and Mark Defy in support are equally institutionally negligent and dismissive.

One of the true delights of this production is Sarah Armstrong.  She, like most of the cast play several roles but her Nurse Isabella in these early scenes is such a lovely creation.  Her vivid expressions and complete engagement in the role are stellar.  And the way Sarah shows Isabella’s outrage at the other nurses’ behaviour is clear and present acting of the best kind.  She lights up the stage every time she appears.

As does Georgia Cooper.  Georgia arrives on stage after a beautifully elucidated meditative music piece (Kylie Harris, Jes Vandrempt, Nick Lewis) performed with Tibetan bowls, stark white lighting and costumes, supported by a soundscape gently under to add to the aural beauty.    Georgia shimmers and not just because of her sparkly costume.  It is the spark and fire of her storytelling that really gets you.  Comic lines delivered with a sense of infectious fun hypnotise us into travelling to a new destination with her.  A place of perspective.

That is a rich place for a singer of style and passion.  Nina Salece is a star from her “Where is Love?” song to the way she directly engages with the audience during the big numbers.  She is absolutely charming and has a killer smile.  There is  some recorded music in the show but there are also live music makers Frankie Bouchier and Rob Gist, (Composer Robin Gist) to keep the work flowing.

Speaking of killers, T Man (that’s Tarantula to the uninitiated) is played by Heath Ramsay and he is just cracker as he eyes off the crowd looking for his next meal.  It is the gruesome and the gothic interpreted with glee.  Heath’s work is the first part of a really interesting sequence where insects struggle for torturous supremacy over Glenn who has been left … just left.  Each of the ensemble here work so well together.

With Robert Mockler as a commanding Lord of the Flies, the tension is palpable.  Frankie Bouchier as Cockroach, Nick Gell as Fang, Mark Inwood as Rotten, Paul Mulgrew as Clifton, Odile Le Clezio as Bop, Nick Lewis as Gus, Jes Vandrempt as Stinker are a formidable group.  With their unified, characterful movement and techie headgear, the group create a great fear in the audience about what they will do to Glenn. “Eat humans”, is the chilling cry and an eerie green light predominates as fly buzz on the soundtrack makes it all pretty yucky.  Again, I would point out that this is lived experience for these performers.  No wonder their work is so passionate.

Passion is all around in the next sequence when sex and disability are referenced.  Here the audience is inspired into clapping along to ‘Devil Gate Drive’ leading into some wizarding fun with straws and a cleaner with a broom to get Glenn’s discarded clothes off the floor.  Nick Lewis is a dab hand with a broom, we saw him before the show where he was intent on his work and completely in character.  Now we see him kick it into high gear with ‘You’re the Voice’.  Pump it up man!!!  He has some serious moves; his dancing is awesome and he is soon joined by the rest of the cast for a thrilling and emotional section.  A real high point but there is more to come.

The last few scenes of the production belong to Emily Dash as Amara, Erica Halvorsen as Glenn’s Guardian Angel and Emily Marks as Caterpillar/Butterfly.  Drawings are displayed, there is an interpretive dance expressing the sheer love of movement to music and a monologue delivered with an unparalleled emotional intensity as the themes and the red wool are drawn together.  The world needs “… the beauty you create.”

Type ‘beauty’.  Type ‘theatre of relevance and power’.  Type ‘performances of skill and belief’.   Right click.  Pull down synonyms. There is only one … Midnight Feast Theatre Company’s production of CHRYSALIS.