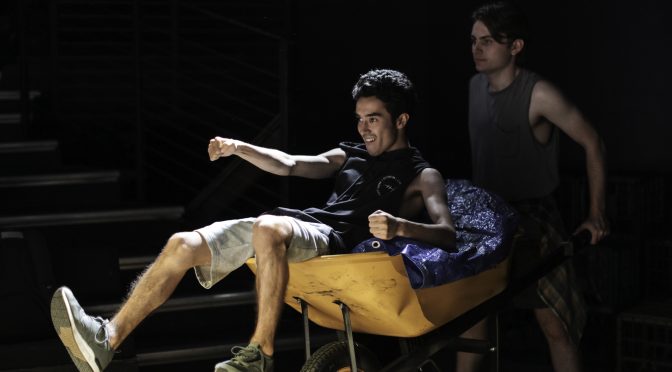 Director Rachel Chant‘s program notes gives only a slight indication of the challenge at the heart of the Australian Theatre for Young People (ATYP)  production playing at the SBW Stables Theatre.

Take 10 plays, each excellent in itself and create a production which at once entertains but also foregrounds the work of each of the 10 playwrights.  Gifted with a stunningly good ensemble of actors aged 16 – 22, Chant and the playwrights must have laboured mightily because CHRYSALIS is a seamless, entertaining watch.

The first person we meet in detail is a girl in conflict within herself as she heads out on a date, the pressures of which might come as a shock to an adult audience.  There is trouble all around for these boys and girls, troubles to be shared with each other or with us.  We will encounter other young women, beset by judgements from without or troubling thoughts within and behaviour apparent.   We will meet boys becoming men with love and identity on their mind.

The ensemble is Brenton Bell, Anika Bhatia, Caitlin Burley, Jeremi Campese, Claire Crighton, Benjamin Tarlinton, Clare Taylor and Margaret Thanos.  Each character they bring is finely drawn and despite only being in front of us briefly, their struggle and their enthusiastic embracing of a life to live is engaging to watch and often, to learn from.

Every piece vibrates with the complexity of modern life and is scrupulously edited for verisimilitude and authenticity. Young people’s voices with truth in the laughter, the vernacular and the circumstances.

They are all kids trapped in a town they hate and can’t wait to see the back of as they take their high school diploma off into the world .  Characters appear, pour out their hearts to each other or to us, only to take flight as the town’s youth assembles to  explore what has grown or changed.  And it may be that pastures greener might not be for all.

With the town construct clearly elucidated early, changes don’t jolt or jar.  They are 10 discrete works, monologues and duologues, but aided by a clever soundscape, and focused area lighting, the transitions elide seamlessly into each other .  Most of the pieces are meditative rather than narrative which helps the concept work.

INTERSECTION 2018: CHRYSALIS presented by ATYP [Facebook] continues at the SBW Stables Theatre until 17th February and it is an engrossing insight into a world we rarely see presented  truthfully on stage.