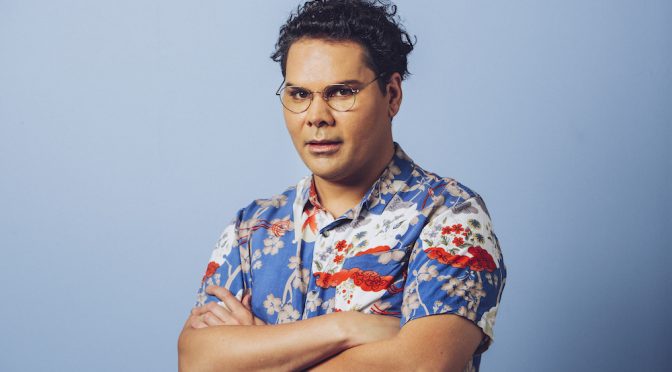 Thompson has signed with Singapore and Sydney-based Yavuz Gallery, embracing the  opportunity to captivate new global audiences with his work, particularly throughout the  Asia Pacific art market. The past two decades have seen the artist firmly establish his  practice across Australia and internationally. He now hopes to utilise the gallery’s extensive  Asia Pacific network in bringing this new career chapter to fruition.

“Further establishing my practice in Asia is a really exciting prospect for me. There are really  dynamic things happening across the art landscape there, and it’s a really exciting context for  my work because of my personal familial connection to the region,” says Thompson.

NEW GOLD MOUNTAIN draws on the influence of Thompson’s Chinese-Australian  grandmother, who is a descendant of the first wave of Chinese migration from the mid  1800’s gold rush era. This era is referred to by the Chinese as ‘New Gold Mountain.’ These  cultural narratives are interwoven with the artist’s own recent lockdown experiences, and a  deep connection with nature inherent in his Bidjara identity and experience.

Two of Thompson’s striking Flower Walls feature in this body of work, directly referencing  his Chinese-Australian heritage in both form and symbolism. Often placing himself in the  centre of these botanical photographic constellations, they resonate with viewers of all  cultural backgrounds in their striking evocation of nature, hope and regeneration.

“The Flower Walls in this body of work– titled New Gold Mountain (Xin Jin Shan) and  Double Happiness – are direct references to Chinese-Australian culture, so I’ve used a lot of  specific southern Chinese flowers in them. I felt my grandmother’s presence guiding me  through the entire process of making these works,” he says.

Yavuz Gallery Director Sarah Hibbs, reflects that NEW GOLD MOUNTAIN will intrigue viewers  across Australia and the Asia Pacific region, given the work’s visual dynamism and the  authenticity of its themes. She believes Yavuz Gallery will further support the artist in  reaching new global audiences.

“Earlier this year we were delighted to announce our formal representation of Christian to  coincide with our physical presence at Art Basel Hong Kong. Building on Christian’s existing audiences across Australia, Europe and the United Kingdom, Yavuz Gallery will connect his  practice to new markets via our strong network throughout the Asia Pacific,” she says.

With a background in sculpture and textiles, Thompson’s multidisciplinary practice blurs the  lines between fine art, photography and performance, as expressed in the exhibition’s  multichannel new media work Burdi Burdi (Fire Fire). He reflects that these recent works  have regenerated his creative voice, enabling him to showcase other aspects of his artistic  identity that are perhaps not as well known to the public.

“NEW GOLD MOUNTAIN is an opportunity to share with audiences the intersections of my own  story and simultaneously to explore the larger Australian history which can be nuanced and  confronting. Lockdown has really given me a moment to reflect on 21 years of my work, and I  used that time to rejuvenate my metaphorical creative fire again,” he says.

Not only has Thompsons’s career endured for over two decades, it has remained relevant  throughout. Fulfilling an important role in shaping Australia’s artistic and cultural zeitgeist,  his work is represented in numerous major Australian and international art institutions  including National Gallery of Victoria, Art Gallery of NSW and Aboriginal Art Museum,  Utrecht, The Netherlands. Thompson was also the first Australian Aboriginal scholar to  graduate from the University of Oxford, UK, with a Doctorate in Philosophy (Fine Art).

Thompson is not only a figure of significant artistic and cultural influence, but also an  exemplary role model to an emerging generation of artists with multicultural heritage.