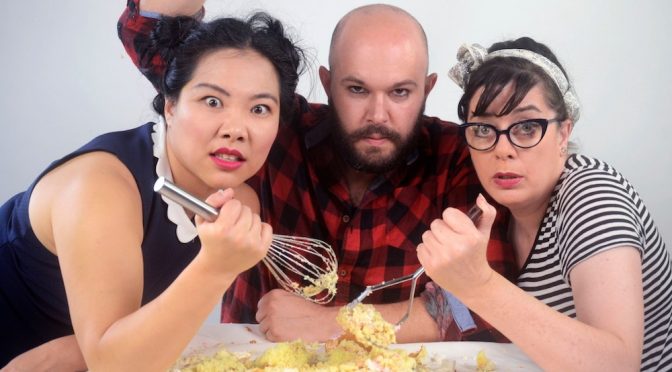 A new Australian opera CHOP CHEF has opened at The Riverside in Parramatta. This delight is able to be sampled in person or digitally via Riverside Theatres Digital.

Western Sydney’s own Blush Opera created this dark funny satire of TV cooking competitions. The stakes are high. The contestants are keen – the judging ‘panel’ aloof and egotistical. The instrumental players sit ready.

CHOP CHEF opens with the set being arranged. It is a simple silver grey and white minimalistic cooking contest kitchen with minimal props and the judging panel shown from behind a lit screen. David Hidden sings in English/Australian, French and Italian accents with exaggerated vocalisation clearly bringing out the competitive egos of the expert panel. The technology works well, even when it doesn’t.

Six contestants Kitty, Tom, Andy, Victoria, Kale and Renée are showcased individually and in ensemble. Victoria, soprano Dr Ayako Ohtake, is a past Chop Chef winner focused on retaining her title. A highlight of this opera is Ayako’s ephemeral singing as she faints and fades away later in the opera. It sears as it burns into the darker aspects of this story.

Kitty, mezzo-soprano Jermaine Chau, is dressed cutesy with a big city attitude. She performs her major role with musicality and energy. Andy, Gavin Brown, is besotted by Kitty and clearly demonstrates this in a memorable highly exaggerated choreographic piece.. Tom, Benjamin Caulkwell, is the carnivorous deep voiced apparently alpha male independent bloke who remains pragmatic throughout. Souffle queen Renee, soprano Lisa Cooper, has a relatively brief part but there is nothing light and fluffy nor simplistic about her performance. Kale, baritone Nick Geddes, portrays the chilled out charmer who initially appears to have a charmed life.

The fact that in actual TV shows the contestants are of unequal ability is advantageous for any cast for this opera. The singers were well cast for this show and any slight differences in vocal quality or power did not detract from the overall performance. The mixture of mainly classically trained operatic, musical theatre and other musical genres voices adds to the variety in the TV show. All performers had good consistent comic timing.

The opera is staged for about 90 minutes plus a 20 minute interval. The structure of the longer first act before the surprise and resolution after the interval may seem unbalanced. Given the audience’s positive response to the first part, perhaps a longer development of the second part may assist in resolving any perceived imbalance.

Julie Koh wrote a very witty libretto which all can follow by reading the surtitles if laughter interrupts their concentration. Paul Smith’s music lets it flow easily. The whole production team collaborated to mount a delightful degustation of wit, musical parody and cringe-worthiness – very enjoyable.

If you have even the most passing interest in “what is broadcast to the public and what is hidden from the frame” (Co-directors Kenneth Moraleda and Nicole Pingon), if you’ve ever groaned at the “archetypes” in TV contestant shows, if you like opera or musical theatre support this new Australian opera by watching Chop Chef live in person or digitally through the Riverside Theatres Parramatta  until Saturday 24th April 2021.