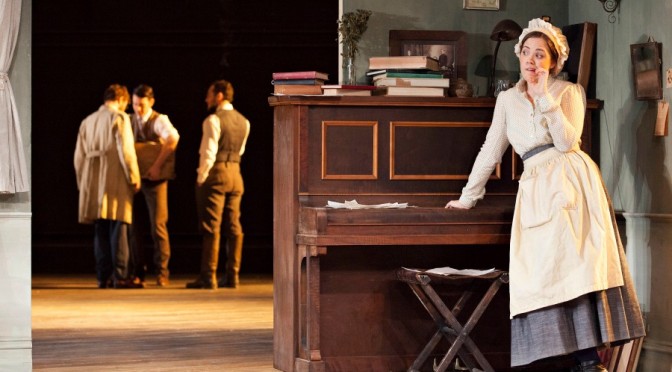 With Maxim Gorky’s 1905 play CHILDREN OF THE SUN we are in similar territory to another classic Russian play, Anton Chekhov’s THE CHERRY ORCHARD. Both plays depict Russia’s old feudal world in its last, very oblivious throes.

The main difference between the plays is the approach the playwrights take to the inevitable ending. In CHILDREN OF THE SUN we get the full Sturm and Drang- to use a German phrase- as rioters invade Protassoff’s enclave. A master of subtlety Chekhov’s play ends with the sound of the chopping of wood in the distance as the family’s much loved country estate begins to be pulled down.

Clearly one of this year’s showpieces, this is a very lavish, big budget production. David Fleischer’s expansive revolve set takes in so many different locations/nooks and crannies. Renee Mulder’s period costumes are stunning. Some of the special effects used- pyrotechnics, lighting, sound- are on the intricate side.

The play’s title refers to Russia’s then intellectual elite who were so focused on their very important intellectual practices that they failed to see the tide of social change taking place around them. The head of the family estate, and the last in his feudal line, eccentric scientist Pavel Protassoff is the epitome of a child of the sun, completely lost in his own world. He is played adroitly by Toby Truslove.

The three main women in Protassoff’s life are played by a trio of brilliant Australian actresses in exemplary form. He treats them all poorly. Protassoff neglects his wife Yelena played by Justine Clarke. He treats his sister Liza, played by Jacqueline McKenzie, with little respect though she has much deeper understanding of the perilous situation that they are all in than he does.

In the most comic role, Helen Thomson plays Melaniya, a recently widowed woman who is besotted by him and is intent on doing everything in her powers to win him including having a face-off with his wife. The lofty, imperious Protassoff is of course disdainful.

Knowing that Melaniya has a crush on him, Protassoff asks favours of her, including her regularly bringing over a dozen of eggs for him to use with his experiments. In the play’s funniest scene, and one of the most cruel, Protassoff decides, on one particular occasion, that he has no use for the eggs, and then other people in the household start throwing the eggs around the room and in Melaniya’s face!

The show features a big cast, twelve in all. Fine performances all round, including Valerie Bader as the interfering Nanny, Yure Covich as the wife beating blacksmith Yegor, Chris Ryan as the pining local vet Boris, Contessa Treffone as the streetwise housemaid Feema, Jay Lag’aia as pawn shop owner, Nazar and James Bell as his son, Misha and Hamish Michael as effusive artist, Vageen.