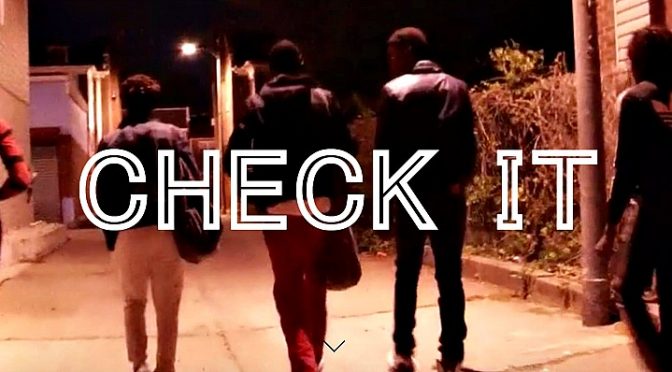 You know you have been teaching too long when edu-speak is pounding in your head.  Resilience – it’s been a pedagogic catch cry for a decade or so and it’s there front and centre of my mind as I watch CHECK IT, a film for the Queer Screen curated Mardi Gras Film Festival.

How do these young people survive?  They are the product of generations of drug affected parents, they live in a city with one of the highest rates of violence against LGBTQ people, they have no experience of education or mainstream employment yet this significant documentary exists to showcase their resilience, sense of community and seeks to empower their prospects. Diana Flor and Toby Oppenheimer are dynamic filmmakers.  Flor wrote and directed the Emmy award-winning documentary Latinos in Beisbol and the Emmy-nominated documentary Cesar Chavez for NBC.  She works on a wide-range of stories for such agencies as Reuters Television, CNN, National Geographic.  Oppenheimer directed two documentaries in 2011 for MSNBC Films, co-produced Devil’s Playground – the Emmy-nominated film about Amish teenagers that premiered at the 2002 Sundance Film Festival – and has tackled a wide range of subjects for PBS, CNN, BBC, A&E, Pivot, The History Channel, VH1, The Sundance Channel, Bravo and many others.

Together as Macro Pictures they directed/produced and Oppenheimer shot, The Nine Lives of Marion Barry for HBO.  After 3 years shooting, and with Steve Buscemi and Stanley Tucci’s Olive Productions by their side, in May 2015 the pair launched an Indiegogo drive to complete the film.  By the close of the campaign were oversubscribed and on their way.  The World Premier was at Tribeca in 2016.  Since then the film has been a festival favourite worldwide and their contribution to the lives of their subjects inestimable.

Their subjects are CHECK IT.   In 2009 three 9th graders created the first gay defense gang in Washington DC, the first documented gay and transgender gang in the US.  Check It now has over 200 members and counting.  These black gay and trans young people fought back.   “No-one is going to stand up for us except ourselves.”  We want to be “role models to faggots we don’t know!”

And fight they did.  The film doesn’t go into too much detail about the legal system contact of the featured members of the group, that might be counterproductive to their futures, but it does make perfectly clear that weapons, aggression and something unexplained about using bleach are part of the mix.

That they hung together, that they were only a phone away if one of the members was in trouble and that these “faggy arse bitches” wanted respect is brutally captured.

The film begins with some unpleasant footage of real life LGBTQ beatings before we meet Tray, Day Day, Alton and others and get a real sense of how this community began and thrives.  We also meet several people who are working with the group.  Ron ‘Mo’ Moten is an ex-banger, now a youth counselor working on the streets.  Duke is boxer who identifies a talent in the street brawler Skittles who, counter-intuitive to his thin, light frame is famed for his quick reflexes and powerful bare-knuckle punch.

And fight they still do.  The film doesn’t shy away from filming and showing the street confrontations or the explosive anger.  Jarmal Harris is a man from a similar background and he runs a ‘Fashion Camp’ for young people including some of the Check It youth.  He is great teacher and copes with storm outs and lashouts, truculence and simmering violence.  “I’ll separate you if I have to” he warns them constantly.  An educator’s instinct if I ever heard it.

Fashion is essential to these young people.  As a confronting number of the group gather to offer their bodies to strangers on K Street, a heartbeat away from the United States seat of power, privilege and influence, an audience can see that their creation of their own style empowers them.  Their chatter about shoes and bags, their ever-changing hairstyles, the skill and care they take on their appearance is just part of the insight we are given.   It’s part of the air they breathe and it becomes the force behind their resilient longevity.

That Indiegogo campaign telegraphed what was going on here:

“While a portion of the funds we raise will go towards completing the film–which is currently in the late stages of editing–another portion–10%–will go directly to the kids themselves–helping to buy sewing machines and fabric for their up and coming fashion line”.

The film’s Facebook page has Street Fashion of the Week images and they sell Check It labelled clothing etc at screenings.    You can buy the label on-line and the Facebook will also bring you up to date with the successes of the individuals we meet in the film.  And after viewing CHECK IT you will want to know.  Such is the power and quality of this film-making.

Tickets for the Mardi Gras Film Festival  including flexi passes to 5 or 10 films are now available. Queer Screen members receive discounted tickets and priority entry to movies. To become a member or to book tickets visit queerscreen.org.au to book or call (02) 9280 1533.