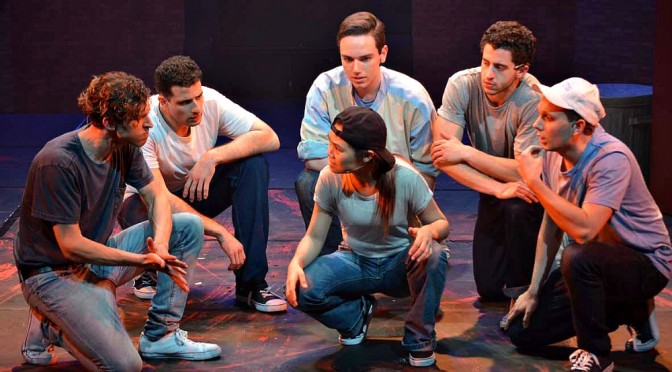 When it first appeared on Broadway in 1957 West Side story, inspired by Shakespeare’s Romeo and Juliet, with its dark themes, sophisticated music, extended dance scenes and focus on social problems marked a turning point in American musical theatre. With a book by Arthur Laurents, music by Leonard Bernstein, lyrics by Stephen Sondheim together with Bernstein, West Side Story has become one of the most popular musicals ever to grace the stage.

West Side Story places star crossed-lovers Tony and Maria squarely at the centre of a gang war in the ethnic blue collar Upper West Side neighbourhood of New York City in the mid 1950’s. The two young, idealistic lovers find themselves caught between warring street gangs, the established American Jets and the immigrant Puerto Rican Sharks.

Tony is a former member of the Jets and best friend of the gang leader, Riff, while Maria is the sister of Bernardo, the leader of the Sharks. This is a story of their struggle to survive in a world of pointless hate, violence and prejudice.

A good cast vividly bring this classic tale to life. Deserving of special mention are the performances by Michaela Leisk as Maria, Susana Downes as Anita, Jon Goodsell as Riff, Luke Davis as Action, Anthony Levin as Tony and Isaac Bradley as Bernardo.

The choreography by Stephanie Edmonds and the fight scenes ‘directed’ by The Sydney Stage Combat School are well executed and exciting to watch, particularly considering the constraints of the size of the stage and the number of actors involved.

Directed by Chapin Ayres, with musical director Kane Wheatley this production by the Chatswood Musical Society has the audience wishing they could sing along to some of the songs such as Maria, Somewhere, Tonight, I Feel Pretty and Gee, Officer Krupke. Get along and enjoy a thoroughly entertaining and well produced production.