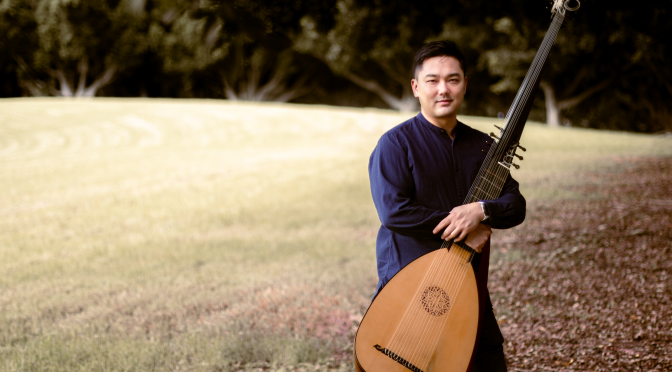 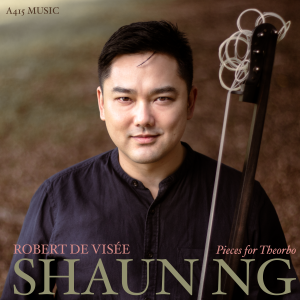 A recording devoted solely to one composer is always a special treat. Even more sumptuous is when the musicology, preparation and performance required to produce the recording celebrates the expressive capabilities of one instrument or common pairing of instruments.

Such has been the focus of four of the first five digital-only releases from new independent early music label A415 Music.

Ng has played on all but one of these releases. His most recent research has resulted in a joyous promotion of the theorbo as a solo instrument. It is solely devoted to the music of Robert de Visée, a rockstar guitatrist, Baroque composer and string performer at the court of French Kings Louis XIV and XV.

This is an hypnotic, elevated journey of discovery created solely by Shaun Ng and A415 Music for us. On successive listenings the colours, gestures and versatility of the solo theorbo, of de Visée’s conversation and of Ng’s Historically Informed Performance skill as well as musical integrity increasingly endear themselves to us. 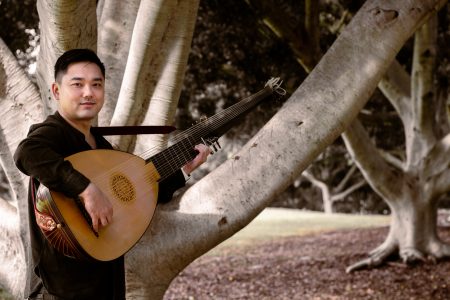 Above : Shaun Ng plays solo theorbo on all tracks of this recording. Photo credit: HanGyu Lee.

Robert de Visée was famous for his performance on and composing for guitar. He also was a formidable exponent of the lute and theorbo during his service of the French Kings of his time.

Shaun Ng turns his intelligent approach and craftmanship of an entire album project for theorbo as the performer himself.  His research skills combine elements found in several contrasting manuscript  sources.

The result is an 18-track release with dance suite movements and other pieces such as tombeau, plaintes, a mascarade and even arrangements of pieces by Lully and Couperin. The music gathered carefully and then put on this recording with special care is organised in the related tonalities of (in order) Pieces in C major, Pieces in C minor, Pieces in G major and Pieces in A minor.

With so many movements making up this recording, the playing is well characterised and the sound of solo theorbo adequately varied.  A free Prelude is heard across the four keys, and Ng’s preparation makes these sound eloquent as well as extemporaneous. All part playing is beautifully delineated. There is a capable division between upper and lower voice trajectories.

Listeners will be able to sink into the poignant pieces in C minor and A minor. The expressive voice of the theorbo’s upper tessitura for melodies  is used to significant effect in the plaintes. Likewise the two sarabandes, one in each minor tonality, are highlights of the slower music. Here, ornamentation and nicely measured work combining melody and accompaniments are effective in leading us through de Visée’s gentle conceptualising of these stately musical dances and styles.

In the absence of very fast tempo choices for the pairs of gigues and courantes the internal workings of these particular dance movements were well taken care of.  Their characteristic contours or patterning within the music was well observerved and  offered up, preserving the essence of the popular dance movements. Lovers of the Baroque suite also are gifted a well-rounded, jaunty Allemande in A minor and in G major a well-humoured Gavotte en rondeau is  followed by a sunny Menuet en rondeau.

The recording palette and engineering from the A415 Music studio brings us a clear, crisp environment in which to relish both the cheery rambling or sadder, more restrained sound of de Visée’s approach to the theorbo. This is a larger instrument with more options and complexity than the guitar which brought him notoriety and much work in the court of the Sun King.

Ng alternates ably between full, brassy tone and a softer, smaller utterance with nice cantabile in melody, ornamentation and through more fluid lines and filigree moments. This contrast occurs between the movements and architecture of four tonalities as well as within each movement. Bass notes and excursions into the instruments deeper range are stirring and strong.

Pieces for Theorbo is an admirable addition to the early music canon, and recordings for the solo instrument. It is an exciting release as it concentrates on advertising variety within the music of one composer, perhaps not a familiar one to all listeners. It also shows the chameleon crispness and ability for caricature of one instrument, brought into the solo role rather than its common chamber or accompanying role.

The digital notes on the recording also cover technical instrument issues and technique choices when playing replica early instruments. In this case the interesting and accessible writing justifies decisions made for gut strings and plucking hand (right hand) position at the end of the instrument.

It is also inspiring in this changing recovery time for music after the past years that this recording has appeared in this country.  We experience the one musician being responsible for fostering a new recording label, for acting in roles of researcher, performer, audio engineer and also digital-release designer. Future enlightened and elevated releases of early music on the A415 Music label are enthusiastically anticipated.